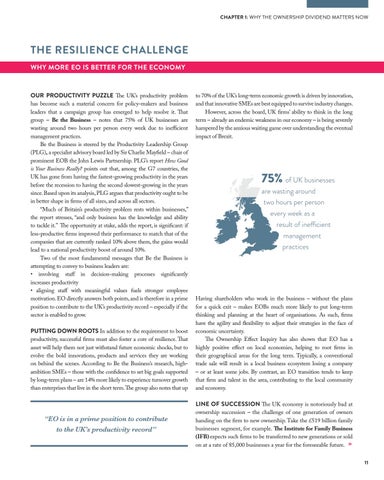 THE RESILIENCE CHALLENGE WHY MORE EO IS BETTER FOR THE ECONOMY

OUR PRODUCTIVITY PUZZLE The UK’s productivity problem has become such a material concern for policy-makers and business leaders that a campaign group has emerged to help resolve it. That group – Be the Business – notes that 75% of UK businesses are wasting around two hours per person every week due to inefficient management practices. Be the Business is steered by the Productivity Leadership Group (PLG), a specialist advisory board led by Sir Charlie Mayfield – chair of prominent EOB the John Lewis Partnership. PLG’s report How Good is Your Business Really? points out that, among the G7 countries, the UK has gone from having the fastest-growing productivity in the years before the recession to having the second slowest-growing in the years since. Based upon its analysis, PLG argues that productivity ought to be in better shape in firms of all sizes, and across all sectors. “Much of Britain’s productivity problem rests within businesses,” the report stresses, “and only business has the knowledge and ability to tackle it.” The opportunity at stake, adds the report, is significant: if less-productive firms improved their performance to match that of the companies that are currently ranked 10% above them, the gains would lead to a national productivity boost of around 10%. Two of the most fundamental messages that Be the Business is attempting to convey to business leaders are: • involving staff in decision-making processes significantly increases productivity • aligning staff with meaningful values fuels stronger employee motivation. EO directly answers both points, and is therefore in a prime position to contribute to the UK’s productivity record – especially if the sector is enabled to grow. PUTTING DOWN ROOTS In addition to the requirement to boost productivity, successful firms must also foster a core of resilience. That asset will help them not just withstand future economic shocks, but to evolve the bold innovations, products and services they are working on behind the scenes. According to Be the Business’s research, highambition SMEs – those with the confidence to set big goals supported by long-term plans – are 14% more likely to experience turnover growth than enterprises that live in the short term. The group also notes that up

to 70% of the UK’s long-term economic growth is driven by innovation, and that innovative SMEs are best equipped to survive industry changes. However, across the board, UK firms’ ability to think in the long term – already an endemic weakness in our economy – i­s being severely hampered by the anxious waiting game over understanding the eventual impact of Brexit.

Having shareholders who work in the business – without the plans for a quick exit – makes EOBs much more likely to put long-term thinking and planning at the heart of organisations. As such, firms have the agility and flexibility to adjust their strategies in the face of economic uncertainty. The Ownership Effect Inquiry has also shown that EO has a highly positive effect on local economies, helping to root firms in their geographical areas for the long term. Typically, a conventional trade sale will result in a local business ecosystem losing a company – or at least some jobs. By contrast, an EO transition tends to keep that firm and talent in the area, contributing to the local community and economy.

LINE OF SUCCESSION The UK economy is notoriously bad at ownership succession – the challenge of one generation of owners handing on the firm to new ownership. Take the £519 billion family businesses segment, for example. The Institute for Family Business (IFB) expects such firms to be transferred to new generations or sold on at a rate of 85,000 businesses a year for the foreseeable future. » 11