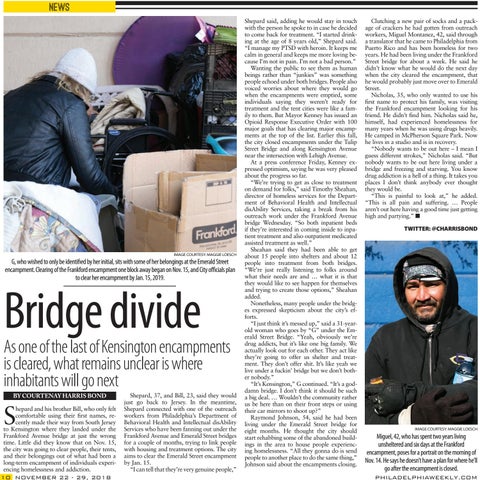 G, who wished to only be identified by her initial, sits with some of her belongings at the Emerald Street encampment. Clearing of the Frankford encampment one block away began on Nov. 15, and City officials plan to clear her encampment by Jan. 15, 2019.

Bridge divide As one of the last of Kensington encampments is cleared, what remains unclear is where inhabitants will go next BY COURTENAY HARRIS BOND

hepard and his brother Bill, who only felt comfortable using their ďŹ rst names, recently made their way from South Jersey to Kensington where they landed under the Frankford Avenue bridge at just the wrong time. Little did they know that on Nov. 15, the city was going to clear people, their tents, and their belongings out of what had been a long-term encampment of individuals experiencing homelessness and addiction.

Shepard, 37, and Bill, 23, said they would just go back to Jersey. In the meantime, Shepard connected with one of the outreach workers from Philadelphiaâ&#x20AC;&#x2122;s Department of Behavioral Health and Intellectual disAbility Services who have been fanning out under the Frankford Avenue and Emerald Street bridges for a couple of months, trying to link people with housing and treatment options. The city aims to clear the Emerald Street encampment by Jan. 15. â&#x20AC;&#x153;I can tell that theyâ&#x20AC;&#x2122;re very genuine people,â&#x20AC;?

Clutching a new pair of socks and a package of crackers he had gotten from outreach workers, Miguel Montanez, 42, said through a translator that he came to Philadelphia from Puerto Rico and has been homeless for two years. He had been living under the Frankford Street bridge for about a week. He said he didnâ&#x20AC;&#x2122;t know what he would do the next day when the city cleared the encampment, that he would probably just move over to Emerald Street. Nicholas, 35, who only wanted to use his ďŹ rst name to protect his family, was visiting the Frankford encampment looking for his friend. He didnâ&#x20AC;&#x2122;t ďŹ nd him. Nicholas said he, himself, had experienced homelessness for many years when he was using drugs heavily. He camped in McPherson Square Park. Now he lives in a studio and is in recovery. â&#x20AC;&#x153;Nobody wants to be out here â&#x20AC;&#x201C; I mean I guess different strokes,â&#x20AC;? Nicholas said. â&#x20AC;&#x153;But nobody wants to be out here living under a bridge and freezing and starving. You know drug addiction is a hell of a thing. It takes you places I donâ&#x20AC;&#x2122;t think anybody ever thought they would be. â&#x20AC;&#x153;This is painful to look at,â&#x20AC;? he added. â&#x20AC;&#x153;This is all pain and suffering. â&#x20AC;Ś People arenâ&#x20AC;&#x2122;t out here having a good time just getting high and partying.â&#x20AC;? Q TWITTER: @CHARRISBOND 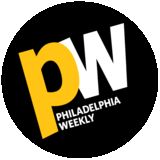 FILL It UP! Stuff your plate and social calendar with these Thanksgiving weekend events you can still wear your sweat pants to

FILL It UP! Stuff your plate and social calendar with these Thanksgiving weekend events you can still wear your sweat pants to