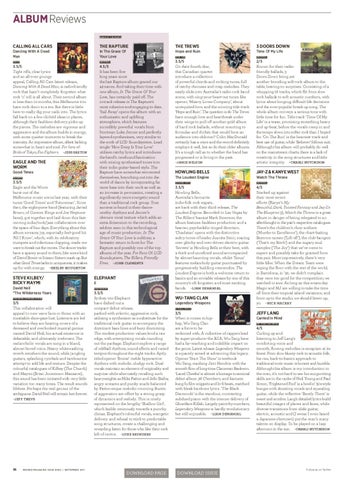 album Reviews album of the month

Dancing With A Dead Man

In The Grace Of Your Love

Tight riffs, clear lyrics and an all-over grungy appeal, Calling All Cars latest release, Dancing With A Dead Man, is radio-friendly rock that hasn’t completely forgotten what rock ‘n’ roll is all about. Their second album in less than 12 months, this Melbourne trio have rock down to a tee. But there is little here to really dig your nails into. The lyrics fall back on a few clichéd ideas in places, although their faultless delivery picks up the pieces. The melodies are vigorous and aggressive and the album builds in energy, with some quieter moments to break the intensity. An impressive album, albeit lacking somewhat in heart and soul. For fans of: Birds of Tokyo, Foo Fighters. ~Jess Saxton

It has been five long years since the last Rapture album graced our airwaves. And taking their time with new album, In The Grace Of Your Love, has certainly paid off. The 11-track release is The Rapture’s most cohesive and engaging to date. ‘Sail Away’ opens the album with an enthusiastic and uplifting atmosphere, which features incredibly powerful vocals from frontman Luke Jenner and perfectly layered synthesisers, very similar to the work of LCD Soundsystem. Lead single ‘How Deep Is Your Love’ utilises catchy lyrics and introduces the band’s newfound fascination with mixing synthesised tones into their indie guitar-based style. The Rapture have somewhat reinvented themselves, branching out into the world of dance by incorporating far more bass into their work as well as an increase in percussion, creating a significantly more energetic sound than a traditional rock group. True success is found in their danceworthy rhythms and Jenner’s obscure vocal texture which adds an extra dimension to the recording, seldom seen in this technological age of music production. In The Grace Of Your Love is sublime; a fantastic return to form for The Rapture and possibly one of the top albums of the year. For Fans Of: LCD Soundsystem, The Killers, Friendly Fires. ~Josh Clements

Eagle and the Worm burst out of the Melbourne music scene last year, with their tunes ‘Good Times’ and ‘Futureman’. Since then, the eight-piece band (featuring Jarrad Brown, of Custom Kings and Joe Neptune fame), got together and laid down this fastmoving indie/rock/jazz collaborative over the space of four days. Everything about this album screams joy, especially feel-good hit ‘All I Know’, which, with its celebratory trumpets and infectious clapping, made me want to break out the moves. The slower tracks have a spacey sound to them, like some kind of David Bowie vs Scissor Sisters mash up. But what Good Times lacks in uniqueness, it makes up for with energy. ~Shelby Houghton

This collaboration will appeal to new wave fans or those with an insatiable shoe-gaze lust. Listeners are led to believe they are hearing covers of a deceased and overlooked musical genius named David Neil; his actual existence is debatable, and ultimately irrelevant. The melancholic vocals are sung in a bland, almost bored voice. Heavy whitewashing reverb smothers the sound, while jangling guitars, splashing cymbals and tambourine attempt to add life and texture. Despite the colourful catalogues of Kilbey (The Church) and Maymi (Brian Jonestown Massacre), this sound has been imitated with very little variation too many times. The result sounds lifeless. Perhaps the real genius of the ambiguous David Neil will remain lost forever. ~Jeff Theys

Sydney trio Elephant have dished out a compact debut release, packed with eclectic, aggressive rock, utilising a synthesiser as a substitute for the traditional rock guitar to accompany the dominant bass lines and busy drumming. The modest production values lend a raw edge, with enterprising vocals rounding out the package. Elephant explore a range of oddball rhythms, sound effects and varied tempos throughout the eight tracks. Aptly titled opener ‘Bruise’ melds hyperactive rhythms with melodic, sludgy rock. Dual vocals maintain an element of originality and surprise while alternately recalling such heavyweights as Mike Patton and Jello Biafra; angry screams and punky snarls balanced by Patton-esque melodic crooning. Bursts of aggression are offset by a strong grasp of dynamics and melody. This is nicely represented on the lengthy ‘Shallow Girl’, which builds ominously towards a punchy climax. Elephant’s colourful vocals, energetic delivery and refusal to stick to predictable song structures, create a challenging and rewarding listen for those who like their rock left of centre. ~Luke Saunders

On their fourth disc, this Canadian quartet introduce a collection of powerful chords and rocking tunes, full of catchy choruses and crisp melodies. They easily slide into Australia’s radio rock band scene, with sing-your-heart-out tunes like opener, ‘Misery Loves Company’, about unrequited love, and the winning title track ‘Hope and Ruin’. The question is do The Trews have enough love and heartbreak under their wings to pull off another gold album of hard rock ballads, without resorting to formulas and clichés that would bore an audience into oblivion? Colin MacDonald certainly has a voice and the record definitely employs it well, but so do their older albums. It’s a tough call as to whether the band has progressed or is living in the past. ~Jamie Nelson The Loudest Engine

Howling Bells, Australia’s favourite indie-folk rock expats, are back with their third release, The Loudest Engine. Recorded in Las Vegas by The Killers’ bassist Mark Stoermer, the album features faultless production and a heavier, psychedelic-tinged direction. ‘Charlatan’ opens with the distinctive sultry tones of leader Juanita Stein, soaring over glitchy and over-driven electric guitar. ‘Secrets’ is Howling Bells at their best, with a thick and unrefined sound accompanied by almost haunting vocals, whilst ‘Sioux’ features melancholy guitar punctuated by progressively building crescendos. The Loudest Engine is both a welcome return to basics and an enviable release by one of this country’s oft forgotten and most exciting bands. ~Liam Demamial

When it comes to hiphop, Wu-Tang Clan are a force to be reckoned with. A collective of rappers lead by super-producer the RZA, Wu-Tang have had a far-reaching and indelible impact on the genre. Latest release Legendary Weapons is squarely aimed at advancing this legacy. Opener ‘Start The Show’ is textbook Wu-Tang, mashing Jimi Hendrix with the smooth flow of long-time Clansman Raekwon. ‘Laced Cheeba’ is almost a homage to seminal debut album 36 Chambers, and features kung fu film snippets and lo-fi beats, matched with bleak hardcore lyrics. ‘The Black Diamonds’ is the standout, contrasting subdued piano with the intense delivery of Ghostface Killah. Largely paint-by-numbers, Legendary Weapons is hardly revolutionary but still enjoyable. ~Liam Demamial

Time Of My Life

Known for their radiofriendly ballads, 3 Doors Down bring yet another brooding soft-rock album to the table, leaving no surprises. Consisting of a whopping 16 tracks, which flit from slow rock ballads to soft acoustic numbers, with lyrics about longing, difficult life decisions and the ever-popular break-up song. The whole album conveys a serious tone with little time for fun. Title track ‘Time Of My Life’ is a tease, promising something heavy and up-beat, before the vocals creep in and the tempo slows into softer rock than I hoped for. ‘On The Run’ is the heaviest track and best use of guitar, while ‘Believer’ follows suit. Although this album will probably do well on the mainstream charts, there is a lack of creativity in the song structures and little artistic integrity. ~Charli Hutchison Watch The Throne

Stacked up against their most recent efforts (Kanye’s My Beautiful, Dark, Twisted Fantasy and Jay-Z’s The Blueprint 3), Watch the Throne is a great album in danger of being relegated to an afterthought in the pair’s respective catalogues. There’s the children’s choir anthem (‘Murder to Excellence’), the chart-baiting Beyonce cameo (‘Lift off’), the club-bangers (‘That’s my Bitch’) and the sugary soul samples (‘The Joy’) that we’ve come to expect and possibly take for granted from this pair. Most impressively, there’s very little filler. When the Dream Team were wiping the floor with the rest of the world, in Barcelona, in ’92, we didn’t complain they were too good for the competition; we watched in awe. As long as this ersatz day Magic and MJ are willing to take the time off from their tropical island vacations, and front up to the studio, we should listen up, yo. ~Nick Mackay

Curling up and listening to Jeff Lang’s comforting voice and smooth, flowing melodies is escapism at its finest. From slow bluesy rock to acoustic folk, his raw, back-to-basics approach to traditional roots music is honest and humble. Although this album is my introduction to the man, it’s not hard to see his songwriting skills are in the ranks of Neil Young and Paul Simon. ‘Frightened Fool’ is a howlin’ 50s-style boogie with shouting vocals and squealing guitar, while the reflective ‘Barely There’ is sweet and sombre. Lang’s detailed lyrics build beautiful images of places and faces, while diverse transitions from slide guitar, electric, acoustic and (I swear I even heard a Japanese shamisen) put the man’s many talents on display. To be played on a lazy afternoon in the sun. ~Charli Hutchison 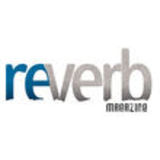