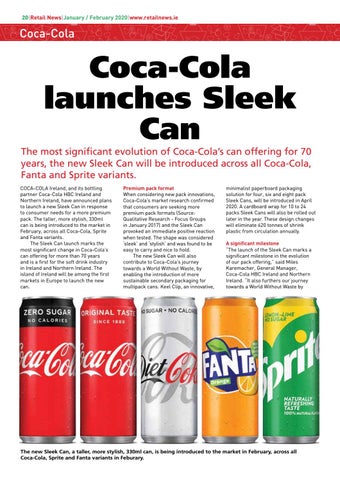 The most significant evolution of Coca-Cola’s can offering for 70 years, the new Sleek Can will be introduced across all Coca-Cola, Fanta and Sprite variants. COCA-COLA Ireland, and its bottling partner Coca-Cola HBC Ireland and Northern Ireland, have announced plans to launch a new Sleek Can in response to consumer needs for a more premium pack. The taller, more stylish, 330ml can is being introduced to the market in February, across all Coca-Cola, Sprite and Fanta variants. The Sleek Can launch marks the most significant change in Coca-Cola’s can offering for more than 70 years and is a first for the soft drink industry in Ireland and Northern Ireland. The island of Ireland will be among the first markets in Europe to launch the new can.

Premium pack format When considering new pack innovations, Coca-Cola’s market research confirmed that consumers are seeking more premium pack formats (Source: Qualitative Research - Focus Groups in January 2017) and the Sleek Can provoked an immediate positive reaction when tested. The shape was considered ‘sleek’ and ‘stylish’ and was found to be easy to carry and nice to hold. The new Sleek Can will also contribute to Coca-Cola’s journey towards a World Without Waste, by enabling the introduction of more sustainable secondary packaging for multipack cans. Keel Clip, an innovative,

minimalist paperboard packaging solution for four, six and eight pack Sleek Cans, will be introduced in April 2020. A cardboard wrap for 10 to 24 packs Sleek Cans will also be rolled out later in the year. These design changes will eliminate 620 tonnes of shrink plastic from circulation annually. A significant milestone “The launch of the Sleek Can marks a significant milestone in the evolution of our pack offering,” said Miles Karemacher, General Manager, Coca-Cola HBC Ireland and Northern Ireland. “It also furthers our journey towards a World Without Waste by

The new Sleek Can, a taller, more stylish, 330ml can, is being introduced to the market in February, across all Coca-Cola, Sprite and Fanta variants in Feburary.