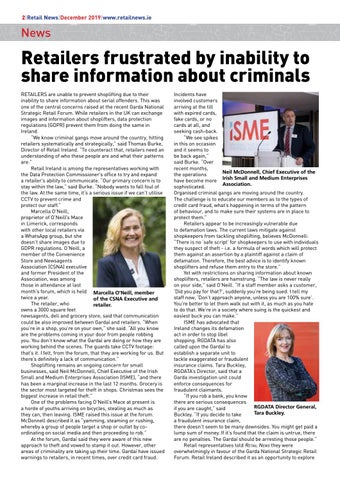 Retailers frustrated by inability to share information about criminals RETAILERS are unable to prevent shoplifting due to their inability to share information about serial offenders. This was one of the central concerns raised at the recent Garda National Strategic Retail Forum. While retailers in the UK can exchange images and information about shoplifters, data protection regulations (GDPR) prevent them from doing the same in Ireland. “We know criminal gangs move around the country, hitting retailers systematically and strategically,” said Thomas Burke, Director of Retail Ireland. “To counteract that, retailers need an understanding of who these people are and what their patterns are.” Retail Ireland is among the representatives working with the Data Protection Commissioner’s office to try and expand a retailer’s ability to communicate. “Our primary concern is to stay within the law,” said Burke. “Nobody wants to fall foul of the law. At the same time, it’s a serious issue if we can’t utilise CCTV to prevent crime and protect our staff.” Marcella O’Neill, proprietor of O’Neill’s Mace in Limerick, corresponds with other local retailers via a WhatsApp group, but she doesn’t share images due to GDPR regulations. O’Neill, a member of the Convenience Store and Newsagents Association (CSNA) executive and former President of the Association, was among those in attendance at last month’s forum, which is held Marcella O’Neill, member twice a year. of the CSNA Executive and The retailer, who retailer. owns a 3000 square feet newsagents, deli and grocery store, said that communication could be also improved between Gardaí and retailers. “When you’re in a shop, you’re on your own,” she said. “All you know are the problems coming in your door from people robbing you. You don’t know what the Gardaí are doing or how they are working behind the scenes. The guards take CCTV footage: that’s it. I felt, from the forum, that they are working for us. But there’s definitely a lack of communication.” Shoplifting remains an ongoing concern for small businesses, said Neil McDonnell, Chief Executive of the Irish Small and Medium Enterprises Association (ISME), “and there has been a marginal increase in the last 12 months. Grocery is the sector most targeted for theft in shops. Christmas sees the biggest increase in retail theft.” One of the problems facing O’Neill’s Mace at present is a horde of youths arriving on bicycles, stealing as much as they can, then leaving. ISME raised this issue at the forum. McDonnell described it as “yamming, steaming or rushing, whereby a group of people target a shop or outlet by coordinating on social media and then proceeding to rob.” At the forum, Gardaí said they were aware of this new approach to theft and vowed to stamp it out. However, other areas of criminality are taking up their time. Gardaí have issued warnings to retailers, in recent times, over credit card fraud.

Incidents have involved customers arriving at the till with expired cards, fake cards, or no cards at all, and seeking cash-back. “We see spikes in this on occasion and it seems to be back again,” said Burke. “Over recent months, Neil McDonnell, Chief Executive of the the operations have become more Irish Small and Medium Enterprises Association. sophisticated. Organised criminal gangs are moving around the country. The challenge is to educate our members as to the types of credit card fraud, what’s happening in terms of the pattern of behaviour, and to make sure their systems are in place to protect them.” Retailers appear to be increasingly vulnerable due to defamation laws. The current laws mitigate against shopkeepers from tackling shoplifting, believes McDonnell: “There is no ‘safe script’ for shopkeepers to use with individuals they suspect of theft - i.e. a formula of words which will protect them against an assertion by a plaintiff against a claim of defamation. Therefore, the best advice is to identify known shoplifters and refuse them entry to the store.” Yet with restrictions on sharing information about known shoplifters, retailers are hamstrung. “The law is never really on your side,” said O’Neill. “If a staff member asks a customer, ‘Did you pay for that?’, suddenly you’re being sued. I tell my staff now, ‘Don’t approach anyone, unless you are 100% sure’. You’re better to let them walk out with it, as much as you hate to do that. We’re in a society where suing is the quickest and easiest buck you can make.” ISME has advocated that Ireland changes its defamation act in order to stop libel shopping. RGDATA has also called upon the Gardaí to establish a separate unit to tackle exaggerated or fraudulent insurance claims. Tara Buckley, RGDATA’s Director, said that a Garda investigation unit could enforce consequences for fraudulent claimants. “If you rob a bank, you know there are serious consequences RGDATA Director General, if you are caught,” said Tara Buckley. Buckley. “If you decide to take a fraudulent insurance claim, there doesn’t seem to be many downsides. You might get paid a lump sum of money. If it’s found that the claim is untrue, there are no penalties. The Gardaí should be arresting those people.” Retail representatives told Retail News they were overwhelmingly in favour of the Garda National Strategic Retail Forum. Retail Ireland described it as an opportunity to explore Retail News, is Ireland’s longest established FMCG B2B magazine. It has been around for over 60 years, from the birth of the supermarket, th...

Retail News, is Ireland’s longest established FMCG B2B magazine. It has been around for over 60 years, from the birth of the supermarket, th...