The Sack - You Up for Downtown? 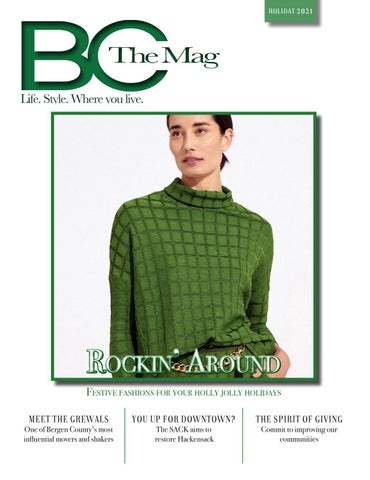 One of Bergen County’s most influential movers and shakers

You Up For Downtown? The SACK aims to restore Hackensack

The Spirit of Giving Commit to improving our communities

You Up For Downtown? Aims To Restore Hackensack By Kimberly Redmond

or decades, downtown Hackensack was the premier destination for residents from throughout North Jersey.

During its heyday, the city’s central business district was home to bustling department stores, like Sears and F.W. Woolworth’s, and popular entertainment venues, including the Fox Theatre and Oritani Theatre. But the advent of shopping malls – like Paramus Park, Garden State Plaza and Riverside Square – in the 1960s and 1970s, followed by the arrival of big-box retailers in the 1980s and 1990s, set off a long decline that led to increased store vacancies and dwindling foot traffic along Main Street in Hackensack. “Unfortunately, during the 80s, 90s and early 2000s, we never had an opportunity to adapt to the changing demographic, changing needs and changing customer,” said Bryan Hekemian, principal of Hekemian &amp; Co., Inc., a Hackensack-based property management company, and chairman of The SACK Business Alliance. Hackensack, like many other New Jersey cities, has struggled amid the ever-evolving retail landscape that has pulled shoppers away from downtowns in favor of big retail stores and online. In response, towns, such as Montclair, Hoboken, Edgewater, Pompton Lakes, and Morristown, have successfully reinvented themselves over the past several decades, welcoming high-end housing, retail, dining and recreation. Hekemian, a longtime Hackensack resident, believes the city can similarly transform itself into a vibrant, walkable downtown and reclaim its status as a true Bergen County destination. And, ever since 2004, the Alliance, a Special Improvement District (SID), has been working toward its goal of restoring Hackensack’s once-great business district. Now, construction reverberates throughout the center of Hackensack, thanks in part to a sweeping downtown revitalization plan aimed at attracting new retail and residential properties. “The goal is to make it a true work-sleep-play environment,” said Hekemian, adding that just a few of the elements that make a downtown “convenient and vibrant” are restaurants, salons, tiny grocery stores and coffee shops.

Photo courtesy of the NY Times

“We’re starting to see glimpses of that,” he said. “It’s exciting to drive down Main Street – you see more people walking and driving, more businesses coming in and more looking at locations in Hackensack. A drive down Main Street today is different than what it was three years ago.” The Alliance, along with city officials and other stakeholders, has worked to enact zoning and policy changes that would allow for mixed-use development downtown, paving the way for residential and commercial spaces along Main and State streets. In 2012, the city approved a redevelopment plan covering a span of over two miles that promoted a range of uses, a change aimed at attracting developers, new residents and business owners into the downtown. The approved plan, which was drafted by the Alliance and city stakeholders following extensive public outreach, encourages activity through the support of mixed-use development and pedestrian-friendly enhancements. It also promotes increased use of Hackensack’s transit links – the city’s bus terminal, which provides access to 12 different NJ Transit bus routes, as well as its two train stations along the Pascack Valley rail line.

Altogether, the redevelopment will represent over $1 billion in new private real estate value and result in lower property taxes for current homeowners. More than two dozen projects are already underway, with at least 4,200 residential units built or approved and an additional 2,710 planned or in the approval process. Though the COVID-19 pandemic had initially slowed revitalization efforts somewhat, Downtown was able to survive with voucher programs that helped families, first responders and frontline workers get food as well as coupon programs for residents to use at local businesses. Another significant milestone in the overall redevelopment effort occurred this past May, when the entire length of Main Street was reopened to two-way traffic for the first time since 1976, a move aimed at making the central business district more accessible and safer. “We’re pleased to see the fruits of our labor. You have to understand that every time the administration changes, we’re always worried whether they will embrace what’s going on,” Hekemian said. “Throughout the past four administrations, they’ve all seen the vision.”

To help alleviate the financial burden of these services, “It’s a public-private andtowe’ve worked hard Mission: Kid Successpartnership issues grants families, so their to get where it is. Our board, the city and the city staff children can receive services and participate in programs worked tirelessly to make it happen,” he said.the nonprofit they couldn’t afford otherwise. Additionally, educates families on pertinent topics, such as at-home Ed Decker, vice chairman of the Alliance and owner of exercises and activities, working with teachers and aides, Musically Yours, a Main Street audio visual equipment implementing dietary changes and limiting screen time. supplier, involved with redevelopment All grantshas arebeen awarded to children younger than efforts 21 years since the beginning and could not be prouder of the district’s work. “Everything happening here now is what’s drawing people in now,” Decker said, adding, “We’re excited for all the new businesses and excited for more people moving here.”

old who reside in the New Jersey and New York MetroDecker heInbelieves it is important city toawarded retain politansaid area. 2020 alone, Mission: for Kidthe success diversity within its business community because he believes over $20,000 in grants, which were allocated to services that will ensure Hackensack remainsand a destination. ranging from functional medicine related supplements

to auditory verbal therapy and sensory motor and cogniJust Main Street and you’ll be treated to a diverse tiveexplore training. mix of retail offerings that include law offices, fashion boutiques, an ice cream parlor, a fitness center and even a juice bar. Main Street also has numerous eclectic dining options, like Cuban, Colombian, Thai, Indian, Lebanese and Soul.The city is already well known with foodies; it is home to the popular German bakery B&amp;W and White Manna Hamburgers,

which frequently ranks high on best burger lists. Being Bergen County’s most ethnically diverse community is an aspect of Hackensack that the Alliance has no desire to change, said Hekemian.

“We’re not trying to fit something in that doesn’t belong. It’s appropriate development within the appropriate district of Hackensack,” he said.

But, he said, what they are trying to do is “change the perception of Hackensack” from stagnant to thriving. That’s why the Alliance is in the midst of a marketing push to accompany the billions of dollars worth of new development underway – an effort that included the unveiling of a new nickname, The SACK, earlier this year.

According to Hekemian, longtime residents have used the nickname “The SACK” before and the Alliance hopes reviving the buzzy nickname will make the city more attractive to potential residents, visitors and business owners.

“All of the sudden, it was a topic of discussion at dinner tables,” he said. “That’s not a bad thing.”

“Hackensack has a great canvas, but it’s not a blank one,” Hekemian said. “We’ve got to make this canvas the best we can and be stewards of change. We can’t just want and do wholesale change in the district. We have to work with stakeholders.”

As for the future of The SACK, that can be summed up with the new anthem cry that is being showcased all over this vibrant area of the city –You Up For Downtown?

The Sack - You Up for Downtown?