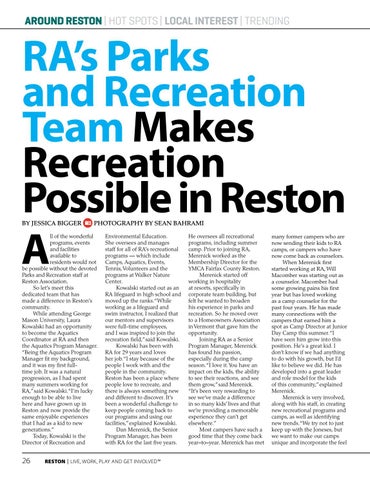 ll of the wonderful programs, events and facilities available to residents would not be possible without the devoted Parks and Recreation staff at Reston Association. So let’s meet this dedicated team that has made a difference in Reston’s community. While attending George Mason University, Laura Kowalski had an opportunity to become the Aquatics Coordinator at RA and then the Aquatics Program Manager. “Being the Aquatics Program Manager fit my background, and it was my first fulltime job. It was a natural progression, as I had spent many summers working for RA,” said Kowalski. “I’m lucky enough to be able to live here and have grown up in Reston and now provide the same enjoyable experiences that I had as a kid to new generations.” Today, Kowalski is the Director of Recreation and

Environmental Education. She oversees and manages staff for all of RA’s recreational programs — which include Camps, Aquatics, Events, Tennis, Volunteers and the programs at Walker Nature Center. Kowalski started out as an RA lifeguard in high school and moved up the ranks. “While working as a lifeguard and swim instructor, I realized that our mentors and supervisors were full-time employees, and I was inspired to join the recreation field,” said Kowalski. Kowalski has been with RA for 29 years and loves her job. “I stay because of the people I work with and the people in the community. Reston has been a place where people love to recreate, and there is always something new and different to discover. It’s been a wonderful challenge to keep people coming back to our programs and using our facilities,” explained Kowalski. Dan Merenick, the Senior Program Manager, has been with RA for the last five years.

He oversees all recreational programs, including summer camp. Prior to joining RA, Merenick worked as the Membership Director for the YMCA Fairfax County Reston. Merenick started off working in hospitality at resorts, specifically in corporate team building, but felt he wanted to broaden his experience in parks and recreation. So he moved over to a Homeowners Association in Vermont that gave him the opportunity. Joining RA as a Senior Program Manager, Merenick has found his passion, especially during the camp season. “I love it. You have an impact on the kids, the ability to see their reactions, and see them grow,” said Merenick. “It’s been very rewarding to see we’ve made a difference in so many kids’ lives and that we’re providing a memorable experience they can’t get elsewhere.” Most campers have such a good time that they come back year–to–year. Merenick has met

many former campers who are now sending their kids to RA camps, or campers who have now come back as counselors. When Merenick first started working at RA, Will Macomber was starting out as a counselor. Macomber had some growing pains his first year but has loved working as a camp counselor for the past four years. He has made many connections with the campers that earned him a spot as Camp Director at Junior Day Camp this summer. “I have seen him grow into this position. He’s a great kid. I don’t know if we had anything to do with his growth, but I’d like to believe we did. He has developed into a great leader and role model for the kids of this community,” explained Merenick. Merenick is very involved, along with his staff, in creating new recreational programs and camps, as well as identifying new trends. “We try not to just keep up with the Joneses, but we want to make our camps unique and incorporate the feel 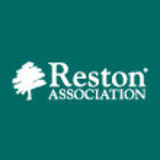