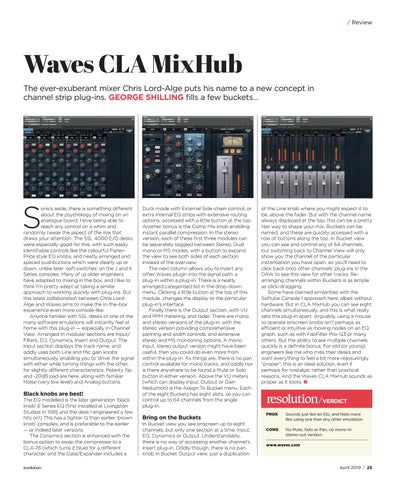 onics aside, there is something different about the psychology of mixing on an analogue board; I love being able to reach any control on a whim and randomly tweak the aspect of the mix that draws your attention. The SSL 4000 E/G desks were especially good for this, with such easily identifiable controls like the colourful FisherPrice style EQ knobs, and neatly arranged and spaced pushbuttons which were clearly up or down, unlike later ‘soft-switches’ on the J and K Series consoles. Many of us older engineers have adapted to mixing in the box, and I like to think I’m pretty adept at taking a similar approach to working quickly with plug-ins. But this latest collaboration between Chris LordAlge and Waves aims to make the in-the-box experience even more console-like. Anyone familiar with SSL desks or one of the many software emulations will instantly feel at home with this plug-in — especially in Channel View. Arranged in modular sections are Input/ Filters, EQ, Dynamics, Insert and Output. The Input section displays the track name, and oddly uses both Line and Mic gain knobs simultaneously, enabling you to ‘drive’ the signal with either while taming things with the other, for slightly different characteristics. Polarity flip and -20dB pad are here, along with familiar Noise (very low level) and Analog buttons.

The EQ modelled is the later generation ‘black knob’ E Series EQ (first installed at Livingston Studios in 1985 and the desk I engineered a few hits on!) This has a tighter Q than earlier ‘brown knob’ consoles, and is preferable to the earlier — or indeed later versions. The Dynamics section is enhanced with the bonus option to swap the compressor to a CLA-76 (which turns it blue) for a different character, and the Gate/Expander includes a

Duck mode with External Side-chain control, or extra internal EQ strips with extensive routing options, accessed with a little button at the top. Another bonus is the Comp Mix knob enabling instant parallel compression. In the stereo version, each of these first three modules can be separately toggled between Stereo, Dual mono or MS modes, with a button to expand the view to see both sides of each section instead of the overview. The next column allows you to insert any other Waves plugin into the signal path: a plug-in within a plug-in. There is a neatly arranged categorised list in the drop-down menu. Clicking a little button at the top of this module changes the display to the particular plug-in’s interface. Finally there is the Output section, with VU and PPM metering, and fader. There are mono and stereo versions of the plug-in, with the stereo version providing comprehensive panning and width controls, and extensive stereo and MS monitoring options. A mono input, stereo output version might have been useful, then you could do even more from within the plug-in. As things are, there is no pan control available for mono tracks, and oddly nor is there anywhere to be found a Mute or Solo button in either version. Above the VU meters (which can display Input, Output or Gain Reduction) is the Assign To Bucket menu. Each of the eight Buckets has eight slots, so you can control up to 64 channels from the single plug-in.

Bring on the Buckets

In Bucket view you see onscreen up to eight channels, but only one section at a time: Input, EQ, Dynamics or Output. Understandably, there is no way of accessing another channel’s Insert plug-in. Oddly though, there is no pan knob in Bucket Output view, just a duplication

of the Line knob where you might expect it to be, above the fader. But with the channel name always displayed at the top, this can be a pretty fast way to shape your mix. Buckets can be named, and these are quickly accessed with a row of buttons along the top. In Bucket view you can see and control any of 64 channels, but switching back to Channel View will only show you the channel of the particular instantiation you have open, so you’ll need to click back onto other channels’ plug-ins in the DAW to see this view for other tracks. Rearranging channels within Buckets is as simple as click-dragging. Some have claimed similarities with the Softube Console 1 approach here, albeit without hardware. But in CLA MixHub you can see eight channels simultaneously, and this is what really sets this plug-in apart. Arguably, using a mouse to operate onscreen knobs isn’t perhaps as efficient or intuitive as moving nodes on an EQ graph, such as with FabFilter Pro-Q3 or many others. But the ability to see multiple channels quickly is a definite bonus. For old (or young) engineers like me who miss their desks and want everything to feel a bit more reassuringly “proper”, this is an ideal solution, even if perhaps for nostalgic rather than practical reasons. And the Waves CLA MixHub sounds as proper as it looks.