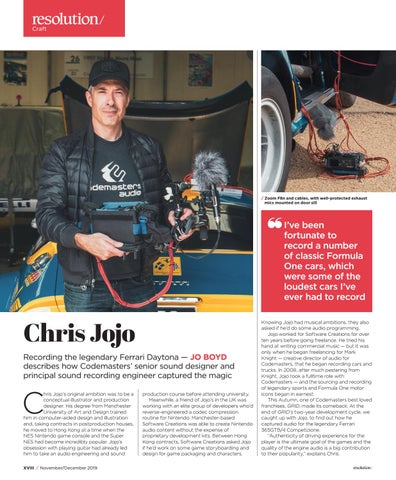 I’ve been fortunate to record a number of classic Formula One cars, which were some of the loudest cars I’ve ever had to record

hris Jojo’s original ambition was to be a conceptual illustrator and production designer. His degree from Manchester University of Art and Design trained him in computer-aided design and illustration and, taking contracts in postproduction houses, he moved to Hong Kong at a time when the NES Nintendo game console and the Super NES had become incredibly popular. Jojo’s obsession with playing guitar had already led him to take an audio engineering and sound XVIII / November/December 2019

production course before attending university. Meanwhile, a friend of Jojo’s in the UK was working with an elite group of developers who’d reverse-engineered a codec compression routine for Nintendo. Manchester-based Software Creations was able to create Nintendo audio content without the expense of proprietary development kits. Between Hong Kong contracts, Software Creations asked Jojo if he’d work on some game storyboarding and design for game packaging and characters.

Knowing Jojo had musical ambitions, they also asked if he’d do some audio programming. Jojo worked for Software Creations for over ten years before going freelance. He tried his hand at writing commercial music — but it was only when he began freelancing for Mark Knight — creative director of audio for Codemasters, that he began recording cars and trucks. In 2008, after much pestering from Knight, Jojo took a fulltime role with Codemasters — and the sourcing and recording of legendary sports and Formula One motor icons began in earnest. This Autumn, one of Codemasters best loved franchises, GRID, made its comeback. At the end of GRID’s two-year development cycle, we caught up with Jojo, to find out how he captured audio for the legendary Ferrari 365GTB/4 Competizione. “Authenticity of driving experience for the player is the ultimate goal of the games and the quality of the engine audio is a big contribution to their popularity,” explains Chris.