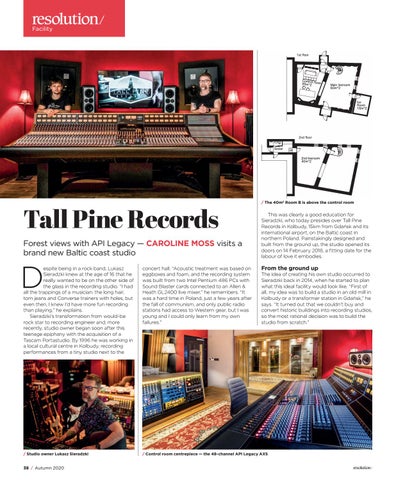 This was clearly a good education for Sieradzki, who today presides over Tall Pine Records in Kolbudy, 15km from Gdańsk and its international airport, on the Baltic coast in northern Poland. Painstakingly designed and built from the ground up, the studio opened its doors on 14 February 2018, a fitting date for the labour of love it embodies.

From the ground up

espite being in a rock band, Lukasz Sieradzki knew at the age of 16 that he really wanted to be on the other side of the glass in the recording studio. “I had all the trappings of a musician: the long hair, torn jeans and Converse trainers with holes, but even then, I knew I’d have more fun recording than playing,” he explains. Sieradzki’s transformation from would-be rock star to recording engineer and, more recently, studio owner began soon after this teenage epiphany with the acquisition of a Tascam Portastudio. By 1996 he was working in a local cultural centre in Kolbudy, recording performances from a tiny studio next to the

concert hall. “Acoustic treatment was based on eggboxes and foam, and the recording system was built from two Intel Pentium 486 PCs with Sound Blaster cards connected to an Allen & Heath GL2400 live mixer,” he remembers. “It was a hard time in Poland, just a few years after the fall of communism, and only public radio stations had access to Western gear, but I was young and I could only learn from my own failures.”

The idea of creating his own studio occurred to Sieradzki back in 2014, when he started to plan what this ideal facility would look like. “First of all, my idea was to build a studio in an old mill in Kolbudy or a transformer station in Gdańsk,” he says. “It turned out that we couldn’t buy and convert historic buildings into recording studios, so the most rational decision was to build the studio from scratch.”