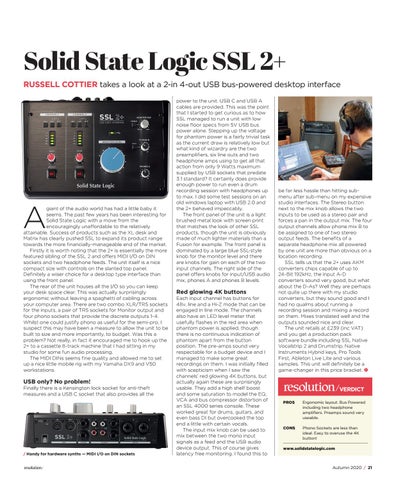 giant of the audio world has had a little baby it seems. The past few years has been interesting for Solid State Logic with a move from the encouragingly unaffordable to the relatively attainable. Success of products such as the XL desk and Matrix has clearly pushed SSL to expand its product range towards the more financially-manageable end of the market. Firstly it is worth noting that the 2+ is essentially the more featured sibling of the SSL 2 and offers MIDI I/O on DIN sockets and two headphone feeds. The unit itself is a nice compact size with controls on the slanted top panel. Definitely a wiser choice for a desktop type interface than using the front panel. The rear of the unit houses all the I/O so you can keep your desk space clear. This was actually surprisingly ergonomic without leaving a spaghetti of cabling across your computer area. There are two combo XLR/TRS sockets for the inputs, a pair of TRS sockets for Monitor output and four phono sockets that provide the discrete outputs 1-4. Whilst one could justify phono as useful for the semi-pro, I suspect this may have been a measure to allow the unit to be built to size and more importantly, to budget. Was this a problem? Not really, in fact it encouraged me to hook up the 2+ to a cassette 8-track machine that I had sitting in my studio for some fun audio processing. The MIDI DINs seems fine quality and allowed me to set up a nice little mobile rig with my Yamaha DX9 and V50 workstations.

USB only? No problem!

power to the unit. USB C and USB A cables are provided. This was the point that I started to get curious as to how SSL managed to run a unit with low noise floor specs from 5V USB bus power alone. Stepping up the voltage for phantom power is a fairly trivial task as the current draw is relatively low but what kind of wizardry are the two preamplifiers, six line outs and two headphone amps using to get all that action from only 9 Watts maximum supplied by USB sockets that predate 3.1 standard? It certainly does provide enough power to run even a drum recording session with headphones up to max. I did some test sessions on an old windows laptop with USB 2.0 and the 2+ behaved impeccably. The front panel of the unit is a light brushed metal look with screen print that matches the look of other SSL products, though the unit is obviously made of much lighter materials than a Fusion for example. The front panel is dominated by a large blue SSL-style knob for the monitor level and there are knobs for gain on each of the two input channels. The right side of the panel offers knobs for input/USB audio mix, phones A and phones B levels.

Each input channel has buttons for 48v, line and a Hi-Z mode that can be engaged in line mode. The channels also have an LED level meter that usefully flashes in the red area when phantom power is applied, though there is no continuous indication of phantom apart from the button position. The pre-amps sound very respectable for a budget device and I managed to make some great recordings on them. I was initially filled with scepticism when I saw the channels’ red glowing 4K buttons, but actually again these are surprisingly usable. They add a high shelf boost and some saturation to model the EQ, VCA and bus compressor distortion of an SSL 4000 series console. These worked great for drums, guitars, and even bass DI but overcooked the top end a little with certain vocals. The input mix knob can be used to mix between the two mono input signals as a feed and the USB audio device output. This of course gives latency free monitoring. I found this to

be far less hassle than hitting submenu after sub-menu on my expensive studio interfaces. The Stereo button next to the mix knob allows the two inputs to be used as a stereo pair and forces a pan in the output mix. The four output channels allow phone mix B to be assigned to one of two stereo output feeds. The benefits of a separate headphone mix all powered by one unit are more than obvious on a location recording. SSL tells us that the 2+ uses AKM converters chips capable of up to 24-Bit 192kHz, the input A-D converters sound very good, but what about the D-As? Well they are perhaps not quite up there with my studio converters, but they sound good and I had no qualms about running a recording session and mixing a record on them. Mixes translated well and the outputs sounded nice and clear. The unit retails at £239 (inc VAT) and you get a production pack software bundle including SSL Native Vocalstrip 2 and Drumstrip, Native Instruments Hybrid keys, Pro Tools First, Ableton Live Lite and various samples. This unit will definitely be a game-changer in this price bracket.

Phono Sockets are less than ideal. Easy to overuse the 4K button!