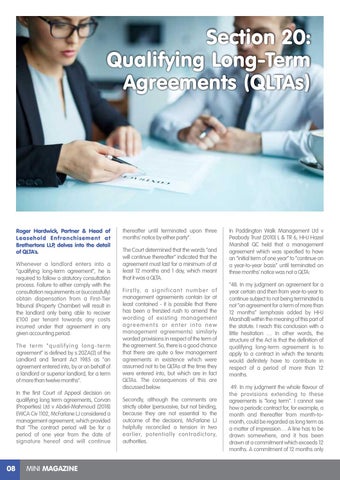 Roger Hardwick, Partner & Head of Leasehold Enfranchisement at Brethertons LLP, delves into the detail of QLTA's. Whenever a landlord enters into a “qualifying long-term agreement”, he is required to follow a statutory consultation process. Failure to either comply with the consultation requirements or (successfully) obtain dispensation from a First-Tier Tribunal (Property Chamber) will result in the landlord only being able to recover £100 per tenant towards any costs incurred under that agreement in any given accounting period. The term "qualifying long-term agreement" is defined by s.20ZA(2) of the Landlord and Tenant Act 1985 as "an agreement entered into, by or on behalf of a landlord or superior landlord, for a term of more than twelve months". In the first Court of Appeal decision on qualifying long term agreements, Corvan (Properties) Ltd v Abdel-Mahmoud [2018] EWCA Civ 1102, McFarlane LJ considered a management agreement, which provided that “The contract period will be for a period of one year from the date of signature hereof and will continue

thereafter until terminated upon three months' notice by either party”. The Court determined that the words “and will continue thereafter” indicated that the agreement must last for a minimum of at least 12 months and 1 day, which meant that it was a QLTA. F i r s t l y, a s i g n i f i c a n t n u m b e r o f management agreements contain (or at least contained - it is possible that there has been a frenzied rush to amend the wording of existing management agreements or enter into new management agreements) similarly worded provisions in respect of the term of the agreement. So, there is a good chance that there are quite a few management agreements in existence which were assumed not to be QLTAs at the time they were entered into, but which are in fact QLTAs. The consequences of this are discussed below. Secondly, although the comments are strictly obiter (persuasive, but not binding, because they are not essential to the outcome of the decision), McFarlane LJ helpfully reconciled a tension in two earlier, potentially contradictor y, authorities.

In Paddington Walk Management Ltd v Peabody Trust [2010] L & TR 6, HHJ Hazel Marshall QC held that a management agreement which was specified to have an “initial term of one year” to “continue on a year-to-year basis” until terminated on three months' notice was not a QLTA: “48. In my judgment an agreement for a year certain and then from year-to-year to continue subject to not being terminated is not “an agreement for a term of more than 12 months” (emphasis added by HHJ Marshall) within the meaning of this part of the statute. I reach this conclusion with a little hesitation … In other words, the structure of the Act is that the definition of qualifying long-term agreement is to apply to a contract in which the tenants would definitely have to contribute in respect of a period of more than 12 months. 49. In my judgment the whole flavour of the provisions extending to these agreements is “long term”. I cannot see how a periodic contract for, for example, a month and thereafter from month-tomonth, could be regarded as long term as a matter of impression… A line has to be drawn somewhere, and it has been drawn at a commitment which exceeds 12 months. A commitment of 12 months only 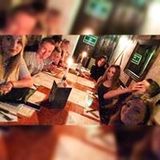