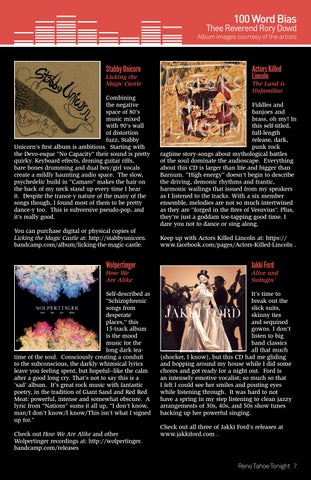 Album images courtesy of the artists

Combining the negative space of 80’s music mixed with 90’s wall of distortion fuzz, Stabby Unicorn’s first album is ambitious. Starting with the Devo-esque “No Capacity” their sound is pretty quirky. Keyboard effects, droning guitar riffs, bare bones drumming and dual boy/girl vocals create a mildly haunting audio space. The slow, psychedelic build in “Camaro” makes the hair on the back of my neck stand up every time I hear it. Despite the trance-y nature of the many of the songs though, I found most of them to be pretty dance-y too. This is subversive pseudo-pop, and it’s really good. You can purchase digital or physical copies of Licking the Magic Castle at: http://stabbyunicorn. bandcamp.com/album/licking-the-magic-castle.

Wolpertinger How We Are Alike

Self-described as “Schizophrenic songs from desperate places,” this 15-track album is the mood music for the long dark teatime of the soul. Consciously creating a conduit to the subconscious, the darkly whimsical lyrics leave you feeling spent, but hopeful--like the calm after a good long cry. That’s not to say this is a ‘sad’ album. It’s great rock music with fantastic poetry, in the tradition of Giant Sand and Red Red Meat: powerful, intense and somewhat obscure. A lyric from “Nations” sums it all up, “I don’t know, man/I don’t know/I know/This isn’t what I signed up for.” Check out How We Are Alike and other Wolpertinger recordings at: http://wolpertinger. bandcamp.com/releases

The Land is Unfamiliar

Fiddles and banjoes and brass, oh my! In this self-titled, full-length release, dark, punk rock ragtime story-songs about mythological battles of the soul dominate the audioscape. Everything about this CD is larger than life and bigger than Barnum. “High energy” doesn’t begin to describe the driving, demonic rhythms and frantic, harmonic wailings that issued from my speakers as I listened to the tracks. With a six member ensemble, melodies are not so much intertwined as they are “forged in the fires of Vesuvius”. Plus, they’re just a goddam toe-tapping good time. I dare you not to dance or sing along. Keep up with Actors Killed Lincoln at: https:// www.facebook.com/pages/Actors-Killed-Lincoln .

Alive and Swingin’ It’s time to break out the slick suits, skinny ties and sequined gowns. I don’t listen to big band classics all that much (shocker, I know), but this CD had me gliding and bopping around my house while I did some chores and got ready for a night out. Ford is an intensely emotive vocalist; so much so that I felt I could see her smiles and pouting eyes while listening through. It was hard to not have a spring in my step listening to clean jazzy arrangements of 30s, 40s, and 50s show tunes backing up her powerful singing. Check out all three of Jakki Ford’s releases at www.jakkiford.com .