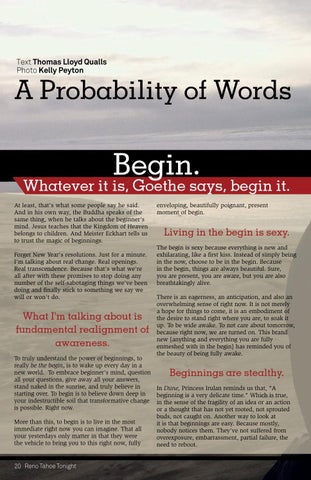 Whatever it is, Goethe says, begin it. At least, that&#39;s what some people say he said. And in his own way, the Buddha speaks of the same thing, when he talks about the beginnerâ&amp;#x20AC;&amp;#x2122;s mind. Jesus teaches that the Kingdom of Heaven belongs to children. And Meister Eckhart tells us to trust the magic of beginnings. Forget New Year&#39;s resolutions. Just for a minute. I&#39;m talking about real change. Real openings. Real transcendence. Because that&#39;s what we&#39;re all after with these promises to stop doing any number of the self-sabotaging things weâ&amp;#x20AC;&amp;#x2122;ve been doing and finally stick to something we say we will or won&#39;t do.

What I&#39;m talking about is fundamental realignment of awareness. To truly understand the power of beginnings, to really be the begin, is to wake up every day in a new world. To embrace beginner&#39;s mind, question all your questions, give away all your answers, stand naked in the sunrise, and truly believe in starting over. To begin is to believe down deep in your indestructible soil that transformative change is possible. Right now. More than this, to begin is to live in the most immediate right now you can imagine. That all your yesterdays only matter in that they were the vehicle to bring you to this right now, fully 20 Reno Tahoe Tonight

Living in the begin is sexy. The begin is sexy because everything is new and exhilarating, like a first kiss. Instead of simply being in the now, choose to be in the begin. Because in the begin, things are always beautiful. Sure, you are present, you are aware, but you are also breathtakingly alive. There is an eagerness, an anticipation, and also an overwhelming sense of right now. It is not merely a hope for things to come, it is an embodiment of the desire to stand right where you are, to soak it up. To be wide awake. To not care about tomorrow, because right now, we are turned on. This brand new [anything and everything you are fully enmeshed with in the begin] has reminded you of the beauty of being fully awake.

Beginnings are stealthy. In Dune, Princess Irulan reminds us that, &quot;A beginning is a very delicate time.&quot; Which is true, in the sense of the fragility of an idea or an action or a thought that has not yet rooted, not sprouted buds, not caught on. Another way to look at it is that beginnings are easy. Because mostly, nobody notices them. Theyâ&amp;#x20AC;&amp;#x2122;ve not suffered from overexposure, embarrassment, partial failure, the need to reboot.