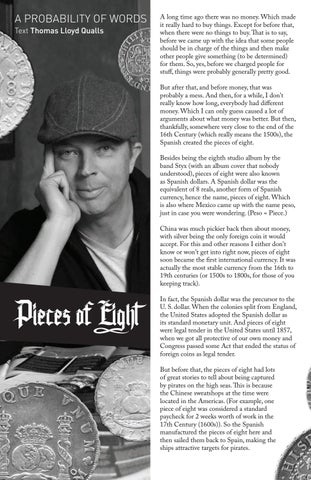 A long time ago there was no money. Which made it really hard to buy things. Except for before that, when there were no things to buy. That is to say, before we came up with the idea that some people should be in charge of the things and then make other people give something (to be determined) for them. So, yes, before we charged people for stuff, things were probably generally pretty good. But after that, and before money, that was probably a mess. And then, for a while, I don't really know how long, everybody had different money. Which I can only guess caused a lot of arguments about what money was better. But then, thankfully, somewhere very close to the end of the 16th Century (which really means the 1500s), the Spanish created the pieces of eight. Besides being the eighth studio album by the band Styx (with an album cover that nobody understood), pieces of eight were also known as Spanish dollars. A Spanish dollar was the equivalent of 8 reals, another form of Spanish currency, hence the name, pieces of eight. Which is also where Mexico came up with the name peso, just in case you were wondering. (Peso = Piece.) China was much pickier back then about money, with silver being the only foreign coin it would accept. For this and other reasons I either don't know or won't get into right now, pieces of eight soon became the first international currency. It was actually the most stable currency from the 16th to 19th centuries (or 1500s to 1800s, for those of you keeping track).

In fact, the Spanish dollar was the precursor to the U. S. dollar. When the colonies split from England, the United States adopted the Spanish dollar as its standard monetary unit. And pieces of eight were legal tender in the United States until 1857, when we got all protective of our own money and Congress passed some Act that ended the status of foreign coins as legal tender. But before that, the pieces of eight had lots of great stories to tell about being captured by pirates on the high seas. This is because the Chinese sweatshops at the time were located in the Americas. (For example, one piece of eight was considered a standard paycheck for 2 weeks worth of work in the 17th Century (1600s)). So the Spanish manufactured the pieces of eight here and then sailed them back to Spain, making the ships attractive targets for pirates.