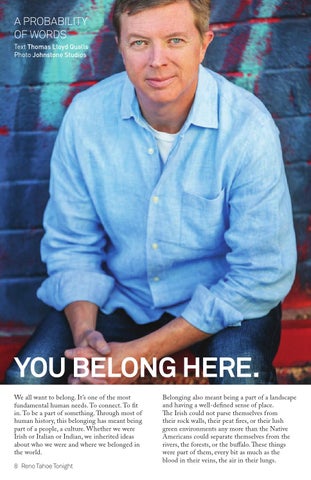 YOU BELONG HERE. We all want to belong. Itâ&amp;#x20AC;&amp;#x2122;s one of the most fundamental human needs. To connect. To fit in. To be a part of something. Through most of human history, this belonging has meant being part of a people, a culture. Whether we were Irish or Italian or Indian, we inherited ideas about who we were and where we belonged in the world. 8 Reno Tahoe Tonight

Belonging also meant being a part of a landscape and having a well-defined sense of place. The Irish could not parse themselves from their rock walls, their peat fires, or their lush green environments any more than the Native Americans could separate themselves from the rivers, the forests, or the buffalo. These things were part of them, every bit as much as the blood in their veins, the air in their lungs.