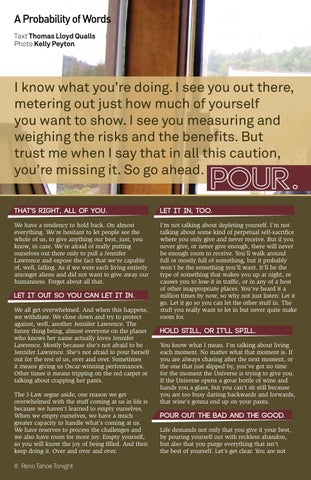 I know what you’re doing. I see you out there, metering out just how much of yourself you want to show. I see you measuring and weighing the risks and the benefits. But trust me when I say that in all this caution, you’re missing it. So go ahead. That&#39;s right, all of you.

We have a tendency to hold back. On almost everything. We’re hesitant to let people see the whole of us, to give anything our best, just, you know, in case. We’re afraid of really putting ourselves out there only to pull a Jennifer Lawrence and expose the fact that we’re capable of, well, falling. As if we were each living entirely amongst aliens and did not want to give away our humanness. Forget about all that.

I’m not talking about depleting yourself. I’m not talking about some kind of perpetual self-sacrifice where you only give and never receive. But if you never give, or never give enough, there will never be enough room to receive. You’ll walk around full or mostly full of something, but it probably won’t be the something you’ll want. It’ll be the type of something that wakes you up at night, or causes you to lose it in traffic, or in any of a host of other inappropriate places. You’ve heard it a million times by now, so why not just listen: Let it go. Let it go so you can let the other stuff in. The stuff you really want to let in but never quite make room for.

Let it out so you can let it in. We all get overwhelmed. And when this happens, we withdraw. We close down and try to protect against, well, another Jennifer Lawrence. The funny thing being, almost everyone on the planet who knows her name actually loves Jennifer Lawrence. Mostly because she’s not afraid to be Jennifer Lawrence. She’s not afraid to pour herself out for the rest of us, over and over. Sometimes it means giving us Oscar-winning performances. Other times it means tripping on the red carpet or talking about crapping her pants. The J-Law segue aside, one reason we get overwhelmed with the stuff coming at us in life is because we haven’t learned to empty ourselves. When we empty ourselves, we have a much greater capacity to handle what’s coming at us. We have reserves to process the challenges and we also have room for more joy. Empty yourself, so you will know the joy of being filled. And then keep doing it. Over and over and over. 8 Reno Tahoe Tonight

Hold still, or it&#39;ll spill. You know what I mean. I’m talking about living each moment. No matter what that moment is. If you are always chasing after the next moment, or the one that just slipped by, you’ve got no time for the moment the Universe is trying to give you. If the Universe opens a great bottle of wine and hands you a glass, but you can’t sit still because you are too busy darting backwards and forwards, that wine’s gonna end up on your pants.

Pour out the bad and the good. Life demands not only that you give it your best, by pouring yourself out with reckless abandon, but also that you purge everything that isn’t the best of yourself. Let’s get clear. You are not