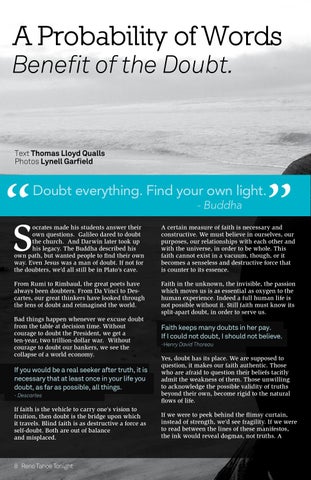 Benefit of the Doubt.

Doubt everything. Find your own light.

A certain measure of faith is necessary and constructive. We must believe in ourselves, our purposes, our relationships with each other and with the universe, in order to be whole. This faith cannot exist in a vacuum, though, or it becomes a senseless and destructive force that is counter to its essence.

From Rumi to Rimbaud, the great poets have always been doubters. From Da Vinci to Descartes, our great thinkers have looked through the lens of doubt and reimagined the world.

Faith in the unknown, the invisible, the passion which moves us is as essential as oxygen to the human experience. Indeed a full human life is not possible without it. Still faith must know its split-apart doubt, in order to serve us.

If you would be a real seeker after truth, it is necessary that at least once in your life you doubt, as far as possible, all things. - Descartes

If faith is the vehicle to carry one&#39;s vision to fruition, then doubt is the bridge upon which it travels. Blind faith is as destructive a force as self-doubt. Both are out of balance and misplaced.

Faith keeps many doubts in her pay. If I could not doubt, I should not believe. -Henry David Thoreau

Yes, doubt has its place. We are supposed to question, it makes our faith authentic. Those who are afraid to question their beliefs tacitly admit the weakness of them. Those unwilling to acknowledge the possible validity of truths beyond their own, become rigid to the natural flows of life. If we were to peek behind the flimsy curtain, instead of strength, we&#39;d see fragility. If we were to read between the lines of these manifestos, the ink would reveal dogmas, not truths. A

Whitney Myer, Mark Sexton Band and the photography of Clayton Beck and Shannon Balazs in the April 2013 RTT.