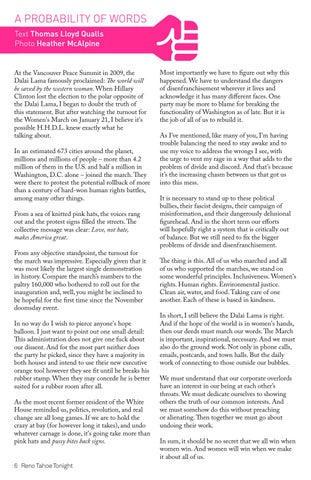 At the Vancouver Peace Summit in 2009, the Dalai Lama famously proclaimed: The world will be saved by the western woman. When Hillary Clinton lost the election to the polar opposite of the Dalai Lama, I began to doubt the truth of this statement. But after watching the turnout for the Women&#39;s March on January 21, I believe it&#39;s possible H.H.D.L. knew exactly what he talking about. In an estimated 673 cities around the planet, millions and millions of people – more than 4.2 million of them in the U.S. and half a million in Washington, D.C. alone – joined the march. They were there to protest the potential rollback of more than a century of hard-won human rights battles, among many other things. From a sea of knitted pink hats, the voices rang out and the protest signs filled the streets. The collective message was clear: Love, not hate, makes America great. From any objective standpoint, the turnout for the march was impressive. Especially given that it was most likely the largest single demonstration in history. Compare the march’s numbers to the paltry 160,000 who bothered to roll out for the inauguration and, well, you might be inclined to be hopeful for the first time since the November doomsday event. In no way do I wish to pierce anyone&#39;s hope balloon. I just want to point out one small detail: This administration does not give one fuck about our dissent. And for the most part neither does the party he picked, since they have a majority in both houses and intend to use their new executive orange tool however they see fit until he breaks his rubber stamp. When they may concede he is better suited for a rubber room after all. As the most recent former resident of the White House reminded us, politics, revolution, and real change are all long games. If we are to hold the crazy at bay (for however long it takes), and undo whatever carnage is done, it&#39;s going take more than pink hats and pussy bites back signs. 6 Reno Tahoe Tonight

Most importantly we have to figure out why this happened. We have to understand the dangers of disenfranchisement wherever it lives and acknowledge it has many different faces. One party may be more to blame for breaking the functionality of Washington as of late. But it is the job of all of us to rebuild it. As I&#39;ve mentioned, like many of you, I&#39;m having trouble balancing the need to stay awake and to use my voice to address the wrongs I see, with the urge to vent my rage in a way that adds to the problem of divide and discord. And that’s because it’s the increasing chasm between us that got us into this mess. It is necessary to stand up to these political bullies, their fascist designs, their campaign of misinformation, and their dangerously delusional figurehead. And in the short term our efforts will hopefully right a system that is critically out of balance. But we still need to fix the bigger problems of divide and disenfranchisement. The thing is this. All of us who marched and all of us who supported the marches, we stand on some wonderful principles. Inclusiveness. Women&#39;s rights. Human rights. Environmental justice. Clean air, water, and food. Taking care of one another. Each of these is based in kindness. In short, I still believe the Dalai Lama is right. And if the hope of the world is in women&#39;s hands, then our deeds must match our words. The March is important, inspirational, necessary. And we must also do the ground work. Not only in phone calls, emails, postcards, and town halls. But the daily work of connecting to those outside our bubbles. We must understand that our corporate overlords have an interest in our being at each other’s throats. We must dedicate ourselves to showing others the truth of our common interests. And we must somehow do this without preaching or alienating. Then together we must go about undoing their work. In sum, it should be no secret that we all win when women win. And women will win when we make it about all of us.