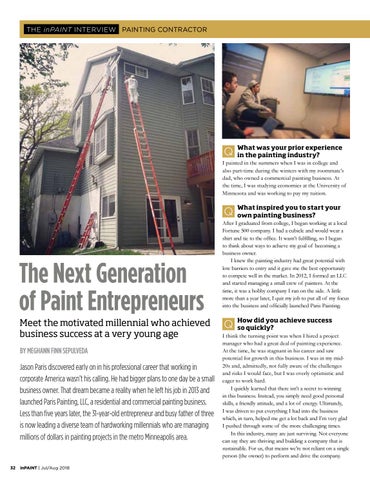 What was your prior experience in the painting industry?

I painted in the summers when I was in college and also part-time during the winters with my roommate’s dad, who owned a commercial painting business. At the time, I was studying economics at the University of Minnesota and was working to pay my tuition.

Jason Paris discovered early on in his professional career that working in corporate America wasn’t his calling. He had bigger plans to one day be a small business owner. That dream became a reality when he left his job in 2013 and launched Paris Painting, LLC, a residential and commercial painting business. Less than five years later, the 31-year-old entrepreneur and busy father of three is now leading a diverse team of hardworking millennials who are managing millions of dollars in painting projects in the metro Minneapolis area.

What inspired you to start your own painting business?

After I graduated from college, I began working at a local Fortune 500 company. I had a cubicle and would wear a shirt and tie to the office. It wasn’t fulfilling, so I began to think about ways to achieve my goal of becoming a business owner. I knew the painting industry had great potential with low barriers to entry and it gave me the best opportunity to compete well in the market. In 2012, I formed an LLC and started managing a small crew of painters. At the time, it was a hobby company I ran on the side. A little more than a year later, I quit my job to put all of my focus into the business and officially launched Paris Painting.

How did you achieve success so quickly?

I think the turning point was when I hired a project manager who had a great deal of painting experience. At the time, he was stagnant in his career and saw potential for growth in this business. I was in my mid20s and, admittedly, not fully aware of the challenges and risks I would face, but I was overly optimistic and eager to work hard. I quickly learned that there isn’t a secret to winning in this business. Instead, you simply need good personal skills, a friendly attitude, and a lot of energy. Ultimately, I was driven to put everything I had into the business which, in turn, helped me get a lot back and I’m very glad I pushed through some of the more challenging times. In this industry, many are just surviving. Not everyone can say they are thriving and building a company that is sustainable. For us, that means we’re not reliant on a single person (the owner) to perform and drive the company.