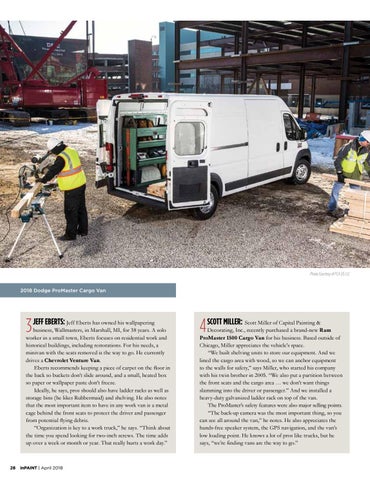 Jeff Eberts has owned his wallpapering business, Wallmasters, in Marshall, MI, for 38 years. A solo worker in a small town, Eberts focuses on residential work and historical buildings, including restorations. For his needs, a minivan with the seats removed is the way to go. He currently drives a Chevrolet Venture Van. Eberts recommends keeping a piece of carpet on the floor in the back so buckets don’t slide around, and a small, heated box so paper or wallpaper paste don’t freeze. Ideally, he says, pros should also have ladder racks as well as storage bins (he likes Rubbermaid) and shelving. He also notes that the most important item to have in any work van is a metal cage behind the front seats to protect the driver and passenger from potential flying debris. “Organization is key to a work truck,” he says. “Think about the time you spend looking for two-inch screws. The time adds up over a week or month or year. That really hurts a work day.”

Scott Miller of Capital Painting &amp; Decorating, Inc., recently purchased a brand-new Ram ProMaster 1500 Cargo Van for his business. Based outside of Chicago, Miller appreciates the vehicle’s space. “We built shelving units to store our equipment. And we lined the cargo area with wood, so we can anchor equipment to the walls for safety,” says Miller, who started his company with his twin brother in 2005. “We also put a partition between the front seats and the cargo area … we don’t want things slamming into the driver or passenger.” And we installed a heavy-duty galvanized ladder rack on top of the van. The ProMaster’s safety features were also major selling points. “The back-up camera was the most important thing, so you can see all around the van,” he notes. He also appreciates the hands-free speaker system, the GPS navigation, and the van’s low loading point. He knows a lot of pros like trucks, but he says, “we’re finding vans are the way to go.”