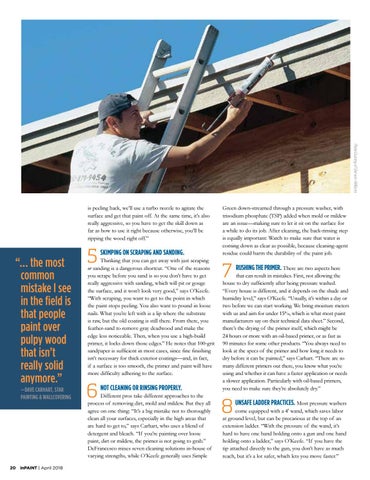 is peeling back, we’ll use a turbo nozzle to agitate the surface and get that paint off. At the same time, it’s also really aggressive, so you have to get the skill down as far as how to use it right because otherwise, you’ll be ripping the wood right off.”

“… the most common mistake I see in the field is that people paint over pulpy wood that isn’t really solid anymore.” —DAVE CARHART, STAR PAINTING &amp; WALLCOVERING

SKIMPING ON SCRAPING AND SANDING.

Thinking that you can get away with just scraping or sanding is a dangerous shortcut. “One of the reasons you scrape before you sand is so you don’t have to get really aggressive with sanding, which will pit or gouge the surface, and it won’t look very good,” says O’Keefe. “With scraping, you want to get to the point in which the paint stops peeling. You also want to pound in loose nails. What you’re left with is a lip where the substrate is raw, but the old coating is still there. From there, you feather-sand to remove gray deadwood and make the edge less noticeable. Then, when you use a high-build primer, it locks down those edges.” He notes that 100-grit sandpaper is sufficient in most cases, since fine finishing isn’t necessary for thick exterior coatings—and, in fact, if a surface is too smooth, the primer and paint will have more difficulty adhering to the surface.

NOT CLEANING OR RINSING PROPERLY.

Different pros take different approaches to the process of removing dirt, mold and mildew. But they all agree on one thing: “It’s a big mistake not to thoroughly clean all your surfaces, especially in the high areas that are hard to get to,” says Carhart, who uses a blend of detergent and bleach. “If you’re painting over loose paint, dirt or mildew, the primer is not going to grab.” DeFrancesco mixes seven cleaning solutions in-house of varying strengths, while O’Keefe generally uses Simple

Green down-streamed through a pressure washer, with trisodium phosphate (TSP) added when mold or mildew are an issue—making sure to let it sit on the surface for a while to do its job. After cleaning, the back-rinsing step is equally important: Watch to make sure that water is coming down as clear as possible, because cleaning-agent residue could harm the durability of the paint job.

RUSHING THE PRIMER. There are two aspects here

that can result in mistakes. First, not allowing the house to dry sufficiently after being pressure washed. “Every house is different, and it depends on the shade and humidity level,” says O’Keefe. “Usually, it’s within a day or two before we can start working. We bring moisture meters with us and aim for under 15%, which is what most paint manufacturers say on their technical data sheet.” Second, there’s the drying of the primer itself, which might be 24 hours or more with an oil-based primer, or as fast as 90 minutes for some other products. “You always need to look at the specs of the primer and how long it needs to dry before it can be painted,” says Carhart. “There are so many different primers out there, you know what you’re using and whether it can have a faster application or needs a slower application. Particularly with oil-based primers, you need to make sure they’re absolutely dry.”

come equipped with a 4&#39; wand, which saves labor at ground level, but can be precarious at the top of an extension ladder. “With the pressure of the wand, it’s hard to have one hand holding onto a gun and one hand holding onto a ladder,” says O’Keefe. “If you have the tip attached directly to the gun, you don’t have as much reach, but it’s a lot safer, which lets you move faster.”