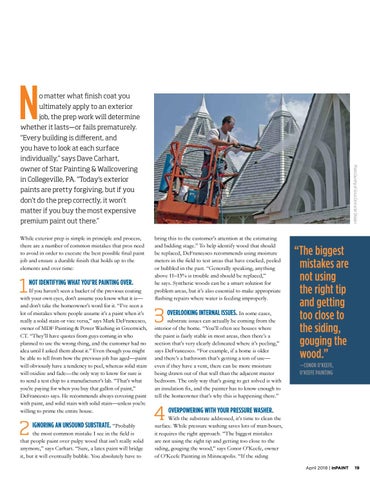 o matter what finish coat you ultimately apply to an exterior job, the prep work will determine

whether it lasts—or fails prematurely.

“Every building is different, and you have to look at each surface individually,” says Dave Carhart, Photo Courtesy of Graco Contractor Division

owner of Star Painting &amp; Wallcovering in Collegeville, PA. “Today’s exterior paints are pretty forgiving, but if you don’t do the prep correctly, it won’t matter if you buy the most expensive premium paint out there.” While exterior prep is simple in principle and process, there are a number of common mistakes that pros need to avoid in order to execute the best possible final paint job and ensure a durable finish that holds up to the elements and over time:

NOT IDENTIFYING WHAT YOU’RE PAINTING OVER.

If you haven’t seen a bucket of the previous coating with your own eyes, don’t assume you know what it is— and don’t take the homeowner’s word for it. “I’ve seen a lot of mistakes where people assume it’s a paint when it’s really a solid stain or vice versa,” says Mark DeFrancesco, owner of MDF Painting &amp; Power Washing in Greenwich, CT. “They’ll have quotes from guys coming in who planned to use the wrong thing, and the customer had no idea until I asked them about it.” Even though you might be able to tell from how the previous job has aged—paint will obviously have a tendency to peel, whereas solid stain will oxidize and fade—the only way to know for sure is to send a test chip to a manufacturer’s lab. “That’s what you’re paying for when you buy that gallon of paint,” DeFrancesco says. He recommends always covering paint with paint, and solid stain with solid stain—unless you’re willing to prime the entire house.

the most common mistake I see in the field is that people paint over pulpy wood that isn’t really solid anymore,” says Carhart. “Sure, a latex paint will bridge it, but it will eventually bubble. You absolutely have to

bring this to the customer’s attention at the estimating and bidding stage.” To help identify wood that should be replaced, DeFrancesco recommends using moisture meters in the field to test areas that have cracked, peeled or bubbled in the past. “Generally speaking, anything above 11–13% is trouble and should be replaced,” he says. Synthetic woods can be a smart solution for problem areas, but it’s also essential to make appropriate flashing repairs where water is feeding improperly.

OVERLOOKING INTERNAL ISSUES. In some cases, substrate issues can actually be coming from the interior of the home. “You’ll often see houses where the paint is fairly stable in most areas, then there’s a section that’s very clearly delineated where it’s peeling,” says DeFrancesco. “For example, if a home is older and there’s a bathroom that’s getting a ton of use— even if they have a vent, there can be more moisture being drawn out of that wall than the adjacent master bedroom. The only way that’s going to get solved is with an insulation fix, and the painter has to know enough to tell the homeowner that’s why this is happening there.”

“The biggest mistakes are not using the right tip and getting too close to the siding, gouging the wood.” —CONOR O’KEEFE, O’KEEFE PAINTING

OVERPOWERING WITH YOUR PRESSURE WASHER.

With the substrate addressed, it’s time to clean the surface. While pressure washing saves lots of man-hours, it requires the right approach. “The biggest mistakes are not using the right tip and getting too close to the siding, gouging the wood,” says Conor O’Keefe, owner of O’Keefe Painting in Minneapolis. “If the siding April 2018 | inPAINT