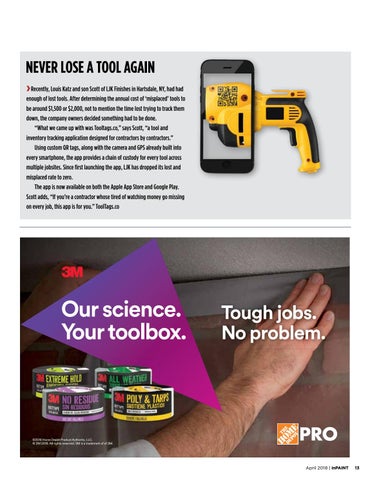 NEVER LOSE A TOOL AGAIN TRecently, Louis Katz and son Scott of LJK Finishes in Hartsdale, NY, had had enough of lost tools. After determining the annual cost of ‘misplaced’ tools to be around $1,500 or $2,000, not to mention the time lost trying to track them down, the company owners decided something had to be done. “What we came up with was Tooltags.co,” says Scott, “a tool and inventory tracking application designed for contractors by contractors.” Using custom QR tags, along with the camera and GPS already built into every smartphone, the app provides a chain of custody for every tool across multiple jobsites. Since first launching the app, LJK has dropped its lost and misplaced rate to zero. The app is now available on both the Apple App Store and Google Play. Scott adds, “If you’re a contractor whose tired of watching money go missing on every job, this app is for you.” ToolTags.co