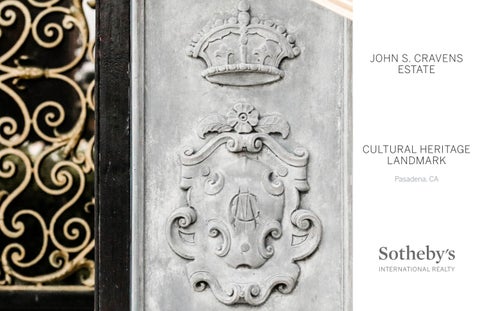 The Cravens Estate was built by the P.J. Walker Company soon

Boulevard and Madeline Drive, is one of the largest and most

after they had completed the historic Doheny Greystone Mansion

significant architectural treasures in the prestigious community of

in Beverly Hills. The Greystone Mansion and Cravens Estate would

be their only recorded residential single-family commissions in

The John S. Cravens Estate was built in the late 1920s for John

and Mildred Cravens. Using only the finest materials and world-

in Southern California include the Biltmore Hotel in Santa Barbara

and the Los Angeles Times Building and Bullock&#39;s Wilshire in Los

boasts approximately 20,000 square feet of living space and was

Angeles. Few builders had a greater impact on the region than P.J.

European finishes, and a Vermont slate roof. It was famous for

Its interior decorator was Raymond Gould of Los Angeles. He was

being the most expensive home ever built in Pasadena, according

a prominent antique dealer in Southern California and one of the

The Cravens Estate was inspired by the Château de Vaux-le-

The Cravens Estate was honored with the Pasadena Beautiful

Vicomte outside Paris, which was designed by Louis XIV’s Principal

Foundation Award in 1965. It was singled out by the American

Institute of Architects as an “authentic example of architecture”

The design of the Château de Vaux-le-Vicomte was considered

that should be preserved.

innovative when it was built and became the foundation of French

The estate was designated as a Cultural Heritage Landmark by the

architecture for the next 150 years.

The architect for the Cravens Estate was San Francisco-based

in the city. It was cited as “one of the few remaining mansions

representative of homes in an era when Pasadena acquired its

American Academy in Rome and École des Beaux-Arts in Paris.

international reputation as the finest and wealthiest residential

He participated in the rebuilding of San Francisco after the great

community in this country.”

earthquake and fire of 1906. With his unique combination of

In 2010, it was honored as the Pasadena Showcase House of

classical training and knowledge of steel-frame construction, he

Design and underwent restoration and renovation by many

was commissioned to design several office buildings in downtown

talented and well-known local designers. The work was performed

San Francisco. Hobart was best known for his private estates

under the guidance of Pasadena Heritage, a historic preservation

in Northern California, including country estates in wealthy

organization, and Peyton Hall, FAIA and Managing Principal of

Hillsborough and French-influenced residences on Presidio

Terrace, Russian Hill, and Nob Hill. His other work included the iconic Grace Cathedral in San Francisco and the 511 Federal Building in Portland, Oregon. The Cravens Estate was his only known commission in Southern California.

The Pedigree John Smith Cravens was born on March 5, 1871 in Kansas City, Missouri and graduated from Yale University in 1893. Later that year he married Mildred Mary Myers, whose father was George S. Myers, a cofounder of the Liggett &amp; Myers Tobacco Company. Mrs. Cravens was born in Alton, Illinois on July 6, 1871 but spent her childhood in St. Louis where she would meet her husband. Mr. and Mrs. Cravens began to winter in Pasadena, California in 1897. They moved there permanently when Mr. Cravens became the first elected President of the Edison Electric Co., one of the predecessors of Southern California Edison Co. Mr. Cravens was one of the original stockholders of the Pacific Mutual Life Insurance Co., a trustee at California Institute of Technology, and on several other boards and organizations. He was active in the development of the towns of Chino, Fontana, and Torrance in Southern California. Mr. and Mrs. Cravens were very involved with the Pasadena community. They were generous donors to local charities and churches. After Mr. and Mrs. Cravens passed away in the late 1940s, the estate passed through several owners and some parts were sold separately. It was donated by Mr. Simon G. Zervos, an industrialist and bakery owner, to the American Red Cross in 1962. Today, it sits on an acre and a half of grounds in one of the prettiest areas of Pasadena.

The Red Cross Story Mr. and Mrs. Cravens, by happy coincidence, were strong supporters of the Pasadena Red Cross Chapter since 1916, when Mrs. Cravens was elected a member of the Chapter’s “Governing Body” (now called the “Board of Directors”). During WWII, Mrs. Cravens organized a sewing group that became a Red Cross auxiliary, meeting weekly in the estate&#39;s Garden Room. Mr. Zervos came to the United States with his mother and sister in 1946, on the first American troop carrier out of Greece after WWII. They were met on the docks of New York by a Red Cross worker. The Red Cross would go on to pay for their food, hotel accommodations, and English lessons for the next six months. The Red Cross then relocated them to Brooklyn and provided them with monthly checks to supplement their incomes for another six months. After Mr. Zervos moved to Los Angeles and prospered in his business ventures, he purchased his dream house, the Cravens Estate. He donated the house to the Red Cross in 1962 to reciprocate the kindness and assistance his family had received when they first arrived in America. In November, 1964, the Red Cross celebrated the 50th anniversary of the Pasadena Chapter in this Chapter House. Today, it serves as the headquarters of the San Gabriel Pomona Valley Chapter, housing a small staff and volunteers. It serves as the command center for the First Aid Stations at the annual Rose Parade. It is used for training and community meetings. It has also been a popular filming location for hit TV shows and movies (Mad Men, JAG, Glee, Desperate Housewives, Commander in Chief, and more recently, Hail, Caesar! with Josh Brolin and George Clooney), and commercials (McDonald’s, General Motors, and Nissan).

Dining Room The oriental-style mural with gold leaf was painted on Chinese paper and installed by Jean Fox Fowler, a Pasadena artist, in 1954. The paper was cut into squares and applied singly by hand, then toned with oil paints of burnt and raw umber as a background for the painting. The long dining table was the Cravensâ&amp;#x20AC;&amp;#x2122; original dining room table. The chairs were added later from funds donated to the Red Cross for this purpose.

Grand Gallery The entrance to the building has a grand foyer that boasts a tricolored inlaid marble floor, carved moldings, and crystal chandeliers. The murals were painted in 1930 by an internationally renowned mural artist, Ernest Pexiotto (1869-1940), who was born in San Francisco, studied in France, and later split his time between New York City and France. He was Director of the Mural Department of the Beaux-Arts Institute of Design in New York from 1919-1926, President of the National Society of Mural Painters from 1929-1935, and President of the School Art League of New York from 1936-1940. He also served on the Art Commission of New York City from 1935-1940 and was Director of Murals for the New York Worldâ&amp;#x20AC;&amp;#x2122;s Fair in 1939. Most of his work were murals commissioned by wealthy private individuals. The largest mural in this Grand Gallery is a painting of the ChĂ˘teau de Vaux-le-Vicomte. The murals were restored in 2010 by the Pasadena Showcase House of Design.

Drawing Room The walls are paneled with mahogany, and the floor is parquet. The fireplace is made from carved marble and is one of six within the Cravens Estate. Each of the six fireplaces was constructed with different colors and carvings to complement the theme of the respective room.

Garden Room During WWII, Mrs. Cravens organized a sewing group that became a Red Cross auxiliary, meeting weekly in the estate&#39;s Garden Room. The Garden Room was uniquely designed with walls and arches in the Palladian architectural style.

Mrs. Cravens&#39; Sitting Room &amp; Solarium The hand painted wall murals of birds and flowers in Mrs. Cravens&#39; sitting room were done by a Mr. Ward of San Francisco. French doors in the solarium open to overlook the vast grounds and gardens beneath.

Exquisite Detail Much of the interior decoration, including door and window hardware, was imported from Europe. European workers were hired to install golden mahogany and French walnut paneling, gold-plated fixtures and carved moldings.

Skylight The magnificent glass-and-wrought-iron skylight over the curved staircase was imported from France. The fortress-like light shaft in the attic is as awe-inspiring as the skylight below.

Mrs. Cravens&#39; Fur Vault In the basement, you will find Mrs. Cravensâ&amp;#x20AC;&amp;#x2122; fur vault with its heavy door made of pre-WWII steel. Such steel is preciously rare because the first atomic bombs and subsequent nuclear tests have changed the composition of steel manufactured since then.

The Next Chapter CULTURAL HERITAGE LANDMARK

The American Red Cross intends to honor the heritage and beauty of the mansion. Thus, they are marketing the property to potential buyers who appreciate the historic nature and architectural significance of the estate, and will add their own chapter to the illustrious history of this important Cultural Heritage Landmark.

Situated on “Millionaire's Row,” along tree-lined Orange Grove Boulevard and Madeline Drive, the John S. Cravens Estate is one of the largest and most significant architectural treasures in the prestigious community of Pasadena, California. Surrounded by brick walls, wrought iron gates, and matured trees, the Cravens Estate was completed in 1930 and famous for being the most expensive home ever built in Pasadena, according to a Los Angeles Times story dated February 6, 1955. The Cravens Estate was designated as a Cultural Heritage Landmark by the City of Pasadena in 1971, and was honored as the Pasadena Showcase House of Design in 2010. 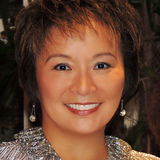