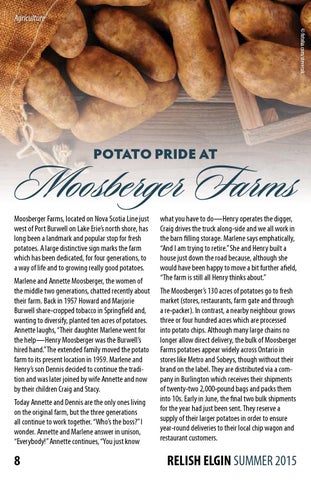 Moosberger Farms, located on Nova Scotia Line just west of Port Burwell on Lake Erie’s north shore, has long been a landmark and popular stop for fresh potatoes. A large distinctive sign marks the farm which has been dedicated, for four generations, to a way of life and to growing really good potatoes.

Marlene and Annette Moosberger, the women of the middle two generations, chatted recently about their farm. Back in 1957 Howard and Marjorie Burwell share-cropped tobacco in Springfield and, wanting to diversify, planted ten acres of potatoes. Annette laughs, “Their daughter Marlene went for the help—Henry Moosberger was the Burwell’s hired hand.” The extended family moved the potato farm to its present location in 1959. Marlene and Henry’s son Dennis decided to continue the tradition and was later joined by wife Annette and now by their children Craig and Stacy. Today Annette and Dennis are the only ones living on the original farm, but the three generations all continue to work together. “Who’s the boss?” I wonder. Annette and Marlene answer in unison, “Everybody!” Annette continues, “You just know

what you have to do—Henry operates the digger, Craig drives the truck along-side and we all work in the barn filling storage. Marlene says emphatically, “And I am trying to retire.” She and Henry built a house just down the road because, although she would have been happy to move a bit further afield, “The farm is still all Henry thinks about.” The Moosberger’s 130 acres of potatoes go to fresh market (stores, restaurants, farm gate and through a re-packer). In contrast, a nearby neighbour grows three or four hundred acres which are processed into potato chips. Although many large chains no longer allow direct delivery, the bulk of Moosberger Farms potatoes appear widely across Ontario in stores like Metro and Sobeys, though without their brand on the label. They are distributed via a company in Burlington which receives their shipments of twenty-two 2,000-pound bags and packs them into 10s. Early in June, the final two bulk shipments for the year had just been sent. They reserve a supply of their larger potatoes in order to ensure year-round deliveries to their local chip wagon and restaurant customers.