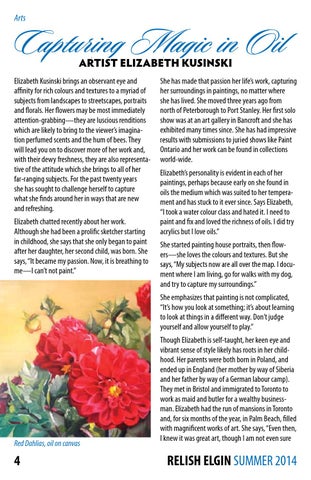 Elizabeth Kusinski brings an observant eye and affinity for rich colours and textures to a myriad of subjects from landscapes to streetscapes, portraits and florals. Her flowers may be most immediately attention-grabbing—they are luscious renditions which are likely to bring to the viewer’s imagination perfumed scents and the hum of bees. They will lead you on to discover more of her work and, with their dewy freshness, they are also representative of the attitude which she brings to all of her far-ranging subjects. For the past twenty years she has sought to challenge herself to capture what she finds around her in ways that are new and refreshing. Elizabeth chatted recently about her work. Although she had been a prolific sketcher starting in childhood, she says that she only began to paint after her daughter, her second child, was born. She says, “It became my passion. Now, it is breathing to me—I can’t not paint.”

She has made that passion her life’s work, capturing her surroundings in paintings, no matter where she has lived. She moved three years ago from north of Peterborough to Port Stanley. Her first solo show was at an art gallery in Bancroft and she has exhibited many times since. She has had impressive results with submissions to juried shows like Paint Ontario and her work can be found in collections world-wide. Elizabeth’s personality is evident in each of her paintings, perhaps because early on she found in oils the medium which was suited to her temperament and has stuck to it ever since. Says Elizabeth, “I took a water colour class and hated it. I need to paint and fix and loved the richness of oils. I did try acrylics but I love oils.” She started painting house portraits, then flowers—she loves the colours and textures. But she says, “My subjects now are all over the map. I document where I am living, go for walks with my dog, and try to capture my surroundings.” She emphasizes that painting is not complicated, “It’s how you look at something; it’s about learning to look at things in a different way. Don’t judge yourself and allow yourself to play.”

Though Elizabeth is self-taught, her keen eye and vibrant sense of style likely has roots in her childhood. Her parents were both born in Poland, and ended up in England (her mother by way of Siberia and her father by way of a German labour camp). They met in Bristol and immigrated to Toronto to work as maid and butler for a wealthy businessman. Elizabeth had the run of mansions in Toronto and, for six months of the year, in Palm Beach, filled with magnificent works of art. She says, “Even then, I knew it was great art, though I am not even sure