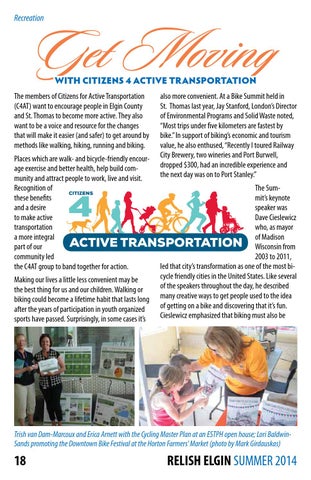 Get Moving WITH CITIZENS 4 ACTIVE TRANSPORTATION

The members of Citizens for Active Transportation (C4AT) want to encourage people in Elgin County and St. Thomas to become more active. They also want to be a voice and resource for the changes that will make it easier (and safer) to get around by methods like walking, hiking, running and biking. Places which are walk- and bicycle-friendly encourage exercise and better health, help build community and attract people to work, live and visit. Recognition of these benefits and a desire to make active transportation a more integral part of our community led the C4AT group to band together for action. Making our lives a little less convenient may be the best thing for us and our children. Walking or biking could become a lifetime habit that lasts long after the years of participation in youth organized sports have passed. Surprisingly, in some cases it’s

also more convenient. At a Bike Summit held in St. Thomas last year, Jay Stanford, London’s Director of Environmental Programs and Solid Waste noted, “Most trips under five kilometers are fastest by bike.” In support of biking’s economic and tourism value, he also enthused, “Recently I toured Railway City Brewery, two wineries and Port Burwell, dropped $300, had an incredible experience and the next day was on to Port Stanley.” The Summit’s keynote speaker was Dave Cieslewicz who, as mayor of Madison Wisconsin from 2003 to 2011, led that city’s transformation as one of the most bicycle friendly cities in the United States. Like several of the speakers throughout the day, he described many creative ways to get people used to the idea of getting on a bike and discovering that it’s fun. Cieslewicz emphasized that biking must also be