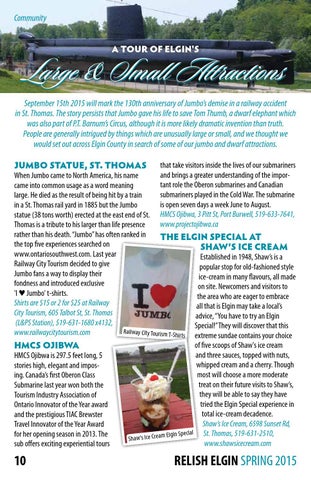 Community A TOUR OF ELGIN'S

Large & Small Attractions September 15th 2015 will mark the 130th anniversary of Jumbo’s demise in a railway accident in St. Thomas. The story persists that Jumbo gave his life to save Tom Thumb, a dwarf elephant which was also part of P.T. Barnum’s Circus, although it is more likely dramatic invention than truth. People are generally intrigued by things which are unusually large or small, and we thought we would set out across Elgin County in search of some of our jumbo and dwarf attractions. Jumbo Statue, St. Thomas

that take visitors inside the lives of our submariners and brings a greater understanding of the imporWhen Jumbo came to North America, his name tant role the Oberon submarines and Canadian came into common usage as a word meaning submariners played in the Cold War. The submarine large. He died as the result of being hit by a train is open seven days a week June to August. in a St. Thomas rail yard in 1885 but the Jumbo statue (38 tons worth) erected at the east end of St. HMCS Ojibwa, 3 Pitt St, Port Burwell, 519-633-7641, www.projectojibwa.ca Thomas is a tribute to his larger than life presence rather than his death. “Jumbo” has often ranked in THE Elgin Special at the top five experiences searched on ShaW’s Ice Cream www.ontariosouthwest.com. Last year Established in 1948, Shaw’s is a Railway City Tourism decided to give popular stop for old-fashioned style Jumbo fans a way to display their ice-cream in many flavours, all made fondness and introduced exclusive on site. Newcomers and visitors to 'I ♥ Jumbo' t-shirts. the area who are eager to embrace Shirts are $15 or 2 for $25 at Railway all that is Elgin may take a local’s City Tourism, 605 Talbot St, St. Thomas advice, “You have to try an Elgin (L&PS Station), 519-631-1680 x4132, Special!” They will discover that this Railway City Tourism T-S www.railwaycitytourism.com hirts extreme sundae contains your choice of five scoops of Shaw's ice cream HMCS OJibWa and three sauces, topped with nuts, HMCS Ojibwa is 297.5 feet long, 5 whipped cream and a cherry. Though stories high, elegant and imposmost will choose a more moderate ing. Canada’s first Oberon Class treat on their future visits to Shaw’s, Submarine last year won both the they will be able to say they have Tourism Industry Association of tried the Elgin Special experience in Ontario Innovator of the Year award total ice-cream decadence. and the prestigious TIAC Brewster Shaw’s Ice Cream, 6598 Sunset Rd, Travel Innovator of the Year Award l ia ec St. Thomas, 519-631-2510, for her opening season in 2013. The Elgin Sp Shaw's Ice Cream www.shawsicecream.com sub offers exciting experiential tours