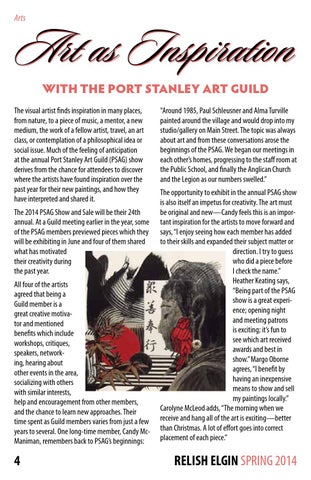 Art as Inspiration WITH THE PORT STANLEY ART GUILD

The visual artist finds inspiration in many places, from nature, to a piece of music, a mentor, a new medium, the work of a fellow artist, travel, an art class, or contemplation of a philosophical idea or social issue. Much of the feeling of anticipation at the annual Port Stanley Art Guild (PSAG) show derives from the chance for attendees to discover where the artists have found inspiration over the past year for their new paintings, and how they have interpreted and shared it. The 2014 PSAG Show and Sale will be their 24th annual. At a Guild meeting earlier in the year, some of the PSAG members previewed pieces which they will be exhibiting in June and four of them shared what has motivated their creativity during the past year. All four of the artists agreed that being a Guild member is a great creative motivator and mentioned benefits which include workshops, critiques, speakers, networking, hearing about other events in the area, socializing with others with similar interests, help and encouragement from other members, and the chance to learn new approaches. Their time spent as Guild members varies from just a few years to several. One long-time member, Candy McManiman, remembers back to PSAG’s beginnings:

&quot;Around 1985, Paul Schleusner and Alma Turville painted around the village and would drop into my studio/gallery on Main Street. The topic was always about art and from these conversations arose the beginnings of the PSAG. We began our meetings in each other’s homes, progressing to the staff room at the Public School, and finally the Anglican Church and the Legion as our numbers swelled.” The opportunity to exhibit in the annual PSAG show is also itself an impetus for creativity. The art must be original and new—Candy feels this is an important inspiration for the artists to move forward and says, “I enjoy seeing how each member has added to their skills and expanded their subject matter or direction. I try to guess who did a piece before I check the name.” Heather Keating says, “Being part of the PSAG show is a great experience; opening night and meeting patrons is exciting; it’s fun to see which art received awards and best in show.” Margo Oborne agrees, “I benefit by having an inexpensive means to show and sell my paintings locally.” Carolyne McLeod adds, “The morning when we receive and hang all of the art is exciting—better than Christmas. A lot of effort goes into correct placement of each piece.”