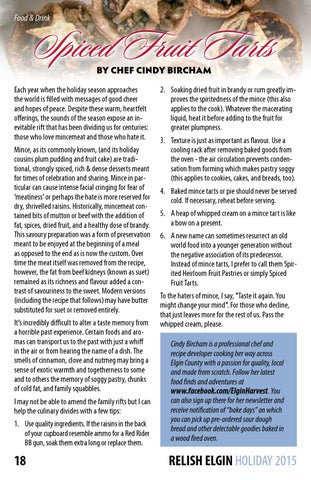 Each year when the holiday season approaches the world is filled with messages of good cheer and hopes of peace. Despite these warm, heartfelt offerings, the sounds of the season expose an inevitable rift that has been dividing us for centuries: those who love mincemeat and those who hate it. Mince, as its commonly known, (and its holiday cousins plum pudding and fruit cake) are traditional, strongly spiced, rich &amp; dense desserts meant for times of celebration and sharing. Mince in particular can cause intense facial cringing for fear of &#39;meatiness&#39; or perhaps the hate is more reserved for dry, shrivelled raisins. Historically, mincemeat contained bits of mutton or beef with the addition of fat, spices, dried fruit, and a healthy dose of brandy. This savoury preparation was a form of preservation meant to be enjoyed at the beginning of a meal as opposed to the end as is now the custom. Over time the meat itself was removed from the recipe, however, the fat from beef kidneys (known as suet) remained as its richness and flavour added a contrast of savouriness to the sweet. Modern versions (including the recipe that follows) may have butter substituted for suet or removed entirely. It&#39;s incredibly difficult to alter a taste memory from a horrible past experience. Certain foods and aromas can transport us to the past with just a whiff in the air or from hearing the name of a dish. The smells of cinnamon, clove and nutmeg may bring a sense of exotic warmth and togetherness to some and to others the memory of soggy pastry, chunks of cold fat, and family squabbles. I may not be able to amend the family rifts but I can help the culinary divides with a few tips: 1. Use quality ingredients. If the raisins in the back of your cupboard resemble ammo for a Red Rider BB gun, soak them extra long or replace them.

2. Soaking dried fruit in brandy or rum greatly improves the spiritedness of the mince (this also applies to the cook). Whatever the macerating liquid, heat it before adding to the fruit for greater plumpness. 3. Texture is just as important as flavour. Use a cooling rack after removing baked goods from the oven - the air circulation prevents condensation from forming which makes pastry soggy (this applies to cookies, cakes, and breads, too). 4. Baked mince tarts or pie should never be served cold. If necessary, reheat before serving. 5. A heap of whipped cream on a mince tart is like a bow on a present. 6. A new name can sometimes resurrect an old world food into a younger generation without the negative association of its predecessor. Instead of mince tarts, I prefer to call them Spirited Heirloom Fruit Pastries or simply Spiced Fruit Tarts. To the haters of mince, I say, &quot;Taste it again. You might change your mind&quot;. For those who decline, that just leaves more for the rest of us. Pass the whipped cream, please. Cindy Bircham is a professional chef and recipe developer cooking her way across Elgin County with a passion for quality, local and made from scratch. Follow her latest food finds and adventures at www.facebook.com/ElginHarvest. You can also sign up there for her newsletter and receive notification of â&amp;#x20AC;&amp;#x153;bake daysâ&amp;#x20AC;? on which you can pick up pre-ordered sour dough bread and other delectable goodies baked in a wood fired oven.

Relish Elgin is a print and online magazine that promotes the people, places, businesses and events of St. Thomas & Elgin County, Ontario, Canada.