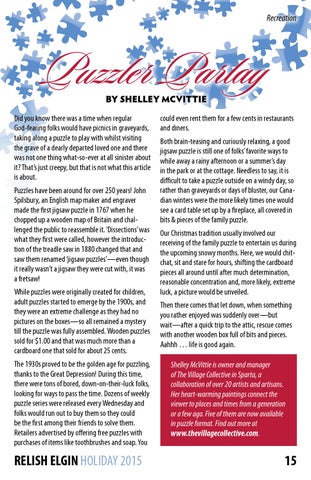 Did you know there was a time when regular God-fearing folks would have picnics in graveyards, taking along a puzzle to play with whilst visiting the grave of a dearly departed loved one and there was not one thing what-so-ever at all sinister about it? That’s just creepy, but that is not what this article is about. Puzzles have been around for over 250 years! John Spilsbury, an English map maker and engraver made the first jigsaw puzzle in 1767 when he chopped up a wooden map of Britain and challenged the public to reassemble it. ‘Dissections’ was what they first were called, however the introduction of the treadle saw in 1880 changed that and saw them renamed ‘jigsaw puzzles’—even though it really wasn’t a jigsaw they were cut with, it was a fretsaw! While puzzles were originally created for children, adult puzzles started to emerge by the 1900s, and they were an extreme challenge as they had no pictures on the boxes—so all remained a mystery till the puzzle was fully assembled. Wooden puzzles sold for $1.00 and that was much more than a cardboard one that sold for about 25 cents. The 1930s proved to be the golden age for puzzling, thanks to the Great Depression! During this time, there were tons of bored, down-on-their-luck folks, looking for ways to pass the time. Dozens of weekly puzzle series were released every Wednesday and folks would run out to buy them so they could be the first among their friends to solve them. Retailers advertised by offering free puzzles with purchases of items like toothbrushes and soap. You

could even rent them for a few cents in restaurants and diners. Both brain-teasing and curiously relaxing, a good jigsaw puzzle is still one of folks’ favorite ways to while away a rainy afternoon or a summer’s day in the park or at the cottage. Needless to say, it is difficult to take a puzzle outside on a windy day, so rather than graveyards or days of bluster, our Canadian winters were the more likely times one would see a card table set up by a fireplace, all covered in bits & pieces of the family puzzle. Our Christmas tradition usually involved our receiving of the family puzzle to entertain us during the upcoming snowy months. Here, we would chitchat, sit and stare for hours, shifting the cardboard pieces all around until after much determination, reasonable concentration and, more likely, extreme luck, a picture would be unveiled. Then there comes that let down, when something you rather enjoyed was suddenly over—but wait—after a quick trip to the attic, rescue comes with another wooden box full of bits and pieces. Aahhh … life is good again. Shelley McVittie is owner and manager of The Village Collective in Sparta, a collaboration of over 20 artists and artisans. Her heart-warming paintings connect the viewer to places and times from a generation or a few ago. Five of them are now available in puzzle format. Find out more at www.thevillagecollective.com.