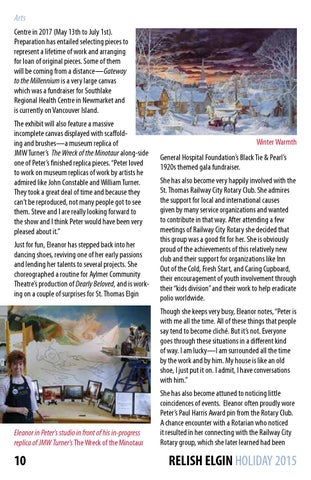 Arts Centre in 2017 (May 13th to July 1st). Preparation has entailed selecting pieces to represent a lifetime of work and arranging for loan of original pieces. Some of them will be coming from a distance—Gateway to the Millennium is a very large canvas which was a fundraiser for Southlake Regional Health Centre in Newmarket and is currently on Vancouver Island. The exhibit will also feature a massive incomplete canvas displayed with scaffolding and brushes—a museum replica of JMW Turner’s The Wreck of the Minotaur along-side one of Peter’s finished replica pieces. “Peter loved to work on museum replicas of work by artists he admired like John Constable and William Turner. They took a great deal of time and because they can’t be reproduced, not many people got to see them. Steve and I are really looking forward to the show and I think Peter would have been very pleased about it.” Just for fun, Eleanor has stepped back into her dancing shoes, reviving one of her early passions and lending her talents to several projects. She choreographed a routine for Aylmer Community Theatre’s production of Dearly Beloved, and is working on a couple of surprises for St. Thomas Elgin

Winter Warmth General Hospital Foundation’s Black Tie &amp; Pearl’s 1920s themed gala fundraiser. She has also become very happily involved with the St. Thomas Railway City Rotary Club. She admires the support for local and international causes given by many service organizations and wanted to contribute in that way. After attending a few meetings of Railway City Rotary she decided that this group was a good fit for her. She is obviously proud of the achievements of this relatively new club and their support for organizations like Inn Out of the Cold, Fresh Start, and Caring Cupboard, their encouragement of youth involvement through their “kids division” and their work to help eradicate polio worldwide. Though she keeps very busy, Eleanor notes, “Peter is with me all the time. All of these things that people say tend to become cliché. But it’s not. Everyone goes through these situations in a different kind of way. I am lucky—I am surrounded all the time by the work and by him. My house is like an old shoe, I just put it on. I admit, I have conversations with him.”

Eleanor in Peter&#39;s studio in front of his in-progress replica of JMW Turner&#39;s The Wreck of the Minotaur

She has also become attuned to noticing little coincidences of events. Eleanor often proudly wore Peter’s Paul Harris Award pin from the Rotary Club. A chance encounter with a Rotarian who noticed it resulted in her connecting with the Railway City Rotary group, which she later learned had been

Relish Elgin is a print and online magazine that promotes the people, places, businesses and events of St. Thomas & Elgin County, Ontario, Canada.