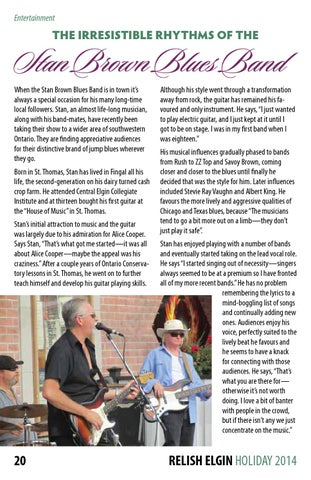 THE IRRESISTiBLE RHYTHMS OF THE

Stan Brown Blues Band When the Stan Brown Blues Band is in town it’s always a special occasion for his many long-time local followers. Stan, an almost life-long musician, along with his band-mates, have recently been taking their show to a wider area of southwestern Ontario. They are finding appreciative audiences for their distinctive brand of jump blues wherever they go.

Born in St. Thomas, Stan has lived in Fingal all his life, the second-generation on his dairy turned cash crop farm. He attended Central Elgin Collegiate Institute and at thirteen bought his first guitar at the “House of Music” in St. Thomas. Stan’s initial attraction to music and the guitar was largely due to his admiration for Alice Cooper. Says Stan, “That’s what got me started—it was all about Alice Cooper—maybe the appeal was his craziness.” After a couple years of Ontario Conservatory lessons in St. Thomas, he went on to further teach himself and develop his guitar playing skills.

Although his style went through a transformation away from rock, the guitar has remained his favoured and only instrument. He says, “I just wanted to play electric guitar, and I just kept at it until I got to be on stage. I was in my first band when I was eighteen.” His musical influences gradually phased to bands from Rush to ZZ Top and Savoy Brown, coming closer and closer to the blues until finally he decided that was the style for him. Later influences included Stevie Ray Vaughn and Albert King. He favours the more lively and aggressive qualities of Chicago and Texas blues, because “The musicians tend to go a bit more out on a limb—they don’t just play it safe”. Stan has enjoyed playing with a number of bands and eventually started taking on the lead vocal role. He says “I started singing out of necessity—singers always seemed to be at a premium so I have fronted all of my more recent bands.” He has no problem remembering the lyrics to a mind-boggling list of songs and continually adding new ones. Audiences enjoy his voice, perfectly suited to the lively beat he favours and he seems to have a knack for connecting with those audiences. He says, “That’s what you are there for— otherwise it’s not worth doing. I love a bit of banter with people in the crowd, but if there isn’t any we just concentrate on the music.”