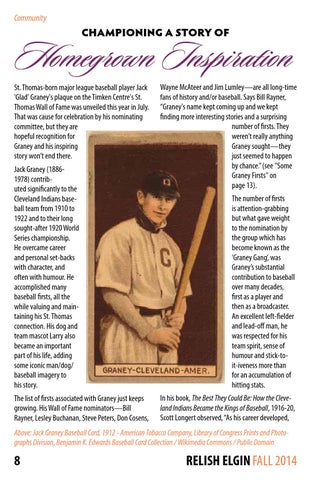 Championing a Story of

Homegrown Inspiration St. Thomas-born major league baseball player Jack 'Glad' Graney's plaque on the Timken Centre's St. Thomas Wall of Fame was unveiled this year in July. That was cause for celebration by his nominating committee, but they are hopeful recognition for Graney and his inspiring story won’t end there. Jack Graney (18861978) contributed significantly to the Cleveland Indians baseball team from 1910 to 1922 and to their long sought-after 1920 World Series championship. He overcame career and personal set-backs with character, and often with humour. He accomplished many baseball firsts, all the while valuing and maintaining his St. Thomas connection. His dog and team mascot Larry also became an important part of his life, adding some iconic man/dog/ baseball imagery to his story. The list of firsts associated with Graney just keeps growing. His Wall of Fame nominators—Bill Rayner, Lesley Buchanan, Steve Peters, Don Cosens,

Wayne McAteer and Jim Lumley—are all long-time fans of history and/or baseball. Says Bill Rayner, “Graney's name kept coming up and we kept finding more interesting stories and a surprising number of firsts. They weren’t really anything Graney sought—they just seemed to happen by chance.” (see "Some Graney Firsts" on page 13). The number of firsts is attention-grabbing but what gave weight to the nomination by the group which has become known as the ‘Graney Gang’, was Graney’s substantial contribution to baseball over many decades, first as a player and then as a broadcaster. An excellent left-fielder and lead-off man, he was respected for his team spirit, sense of humour and stick-toit-iveness more than for an accumulation of hitting stats. In his book, The Best They Could Be: How the Cleveland Indians Became the Kings of Baseball, 1916-20, Scott Longert observed, “As his career developed,