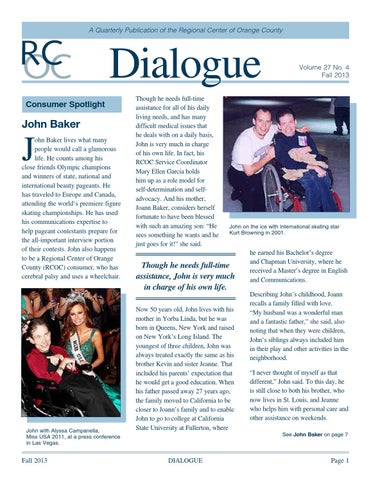 A Quarterly Publication of the Regional Center of Orange County

ohn Baker lives what many people would call a glamorous life. He counts among his close friends Olympic champions and winners of state, national and international beauty pageants. He has traveled to Europe and Canada, attending the world’s premiere figure skating championships. He has used his communications expertise to help pageant contestants prepare for the all-important interview portion of their contests. John also happens to be a Regional Center of Orange County (RCOC) consumer, who has cerebral palsy and uses a wheelchair.

John with Alyssa Campanella, Miss USA 2011, at a press conference in Las Vegas.

Though he needs full-time assistance for all of his daily living needs, and has many difficult medical issues that he deals with on a daily basis, John is very much in charge of his own life. In fact, his RCOC Service Coordinator Mary Ellen Garcia holds him up as a role model for self-determination and selfadvocacy. And his mother, Joann Baker, considers herself fortunate to have been blessed with such an amazing son: “He sees something he wants and he just goes for it!” she said.

John on the ice with international skating star Kurt Browning in 2001.

Though he needs full-time assistance, John is very much in charge of his own life. Now 50 years old, John lives with his mother in Yorba Linda, but he was born in Queens, New York and raised on New York’s Long Island. The youngest of three children, John was always treated exactly the same as his brother Kevin and sister Jeanne. That included his parents’ expectation that he would get a good education. When his father passed away 27 years ago, the family moved to California to be closer to Joann’s family and to enable John to go to college at California State University at Fullerton, where

he earned his Bachelor’s degree and Chapman University, where he received a Master’s degree in English and Communications. Describing John’s childhood, Joann recalls a family filled with love. “My husband was a wonderful man and a fantastic father,” she said, also noting that when they were children, John’s siblings always included him in their play and other activities in the neighborhood. “I never thought of myself as that different,” John said. To this day, he is still close to both his brother, who now lives in St. Louis, and Jeanne who helps him with personal care and other assistance on weekends. See John Baker on page 7