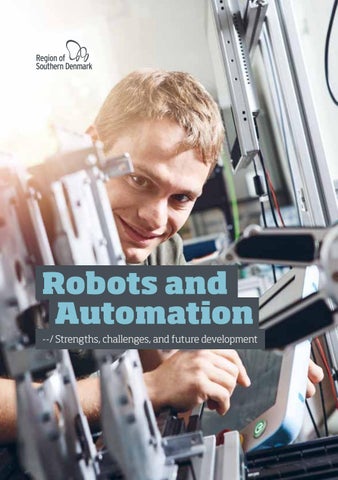 The Region of Southern Denmark is responsible for monitoring and advancing regional development and growth in cooperation with its stakeholders in municipalities, educational institutions, and industry. As a knowledge-based organization, the Region supports the policy process with analyses that gauge the state of key industries and policy areas. This report is a brief summary of the report on Robots and Automation that was published in September 2017 by The Region of Southern Denmark. The full report with more detailed data and analyses is available in Danish. The report can be downloaded from the website: detgodeliv.regionsyddanmark.dk.

Robots and Automation The robots are coming, and more jobs than ever can be fully or partially automated. Danish companies have embraced robots - with 188 robots per 10,000 workers, Denmark is now 7th among the World’s nations in terms of robot use. A notable accomplishment since there is no significant automotive industry in Denmark, an industry that accounts for 38 pct. of the World-wide stock of industrial robots.

Survey on robotics and automation 76 pct. of the firms have already automated operations Among these companies: •• 69 pct. report net benefits •• 77 pct. report a positive return •• 25 pct. report increases in employment •• 56 percent report no change in employment

The Region’s survey of 908 firms shows that many have already automated their processes, and with good results. Automating companies report higher performance, higher satisfaction with their investments, and higher rates of innovation. In spite of their experience with automation, few companieshave invested in robots. Just 12% have acquired robots, although these companies report good results from their investments in robots.

Only 12 pct. have robots - and 63 pct. plan to increase their robotics investment 24 pct. of companies without robots plan to get some

Companies can achieve productivity gains through conventional automation and by increasing their use of robots. The value of robots is significant – the report shows that on average one industrial robot increases value added by 500,000 DKK per year. A complete robot installation typically requires an investment of about 600,000-900,000 DKK.

Market and Outlook for the Future The global market for industrial robots has an approximate turnover of 14 billion US $ annually, and towards 2025 annual growth is expected to be around 10-20 percent. While such growth rates are high, new types of robots such as collaborative robots and mobile robots will likely grow even faster - about 60 percent per year. In addition, the market for commercial service robots is estimated at an annual turnover of 1.6 billion US$,

Odense and the island of Funen is home to some of the leading companies in collaborative robotics and mobile robots. Universal Robots holds an estimated market share of 71 percent of the global market for collaborative robots, and with growth rates exceeding 50 percent, the company is expanding its global footprint. Mobile Industrial Robots, a first-mover in collaborative mobile robots, is gaining foothold fast in the global markets. The two companies are market leaders, but Funen is home to dozens of start-ups, established firms, and subsidiaries of leading multinationals in robotics and automation.

The Odense area holds the highest concentration of firms and jobs in the robot and automation industry in Denmark. Notably, there are 52 producers and 22 integrators here, corresponding to 69 pct. of the Danish producers and 23 pct. of the integrators. Additionally, more than 100 local companies supply components to robotics and automation companies.

Robotics and automation on the Odense area

The map of Denmark shown on the next page displays the share of national employment among integrator firms and producer firms by municipality.

48 pct. of all jobs in producer firms are located in the Odense area

The larger the bubble, the more jobs in a municipality. The sand colored bubbles

Jobs in Robots and Automation by Municipality

High Level of Entrepreneurship There are more firms and jobs among producers in the Odense area than anywhere else in Denmark. The area also takes the lead in terms of entrepreurial activity. Since 1990, the share of new firms has been consistently high - more than 40 pct. of the nation-wide entrepreneurial activity takes place here.

A more recent development is the rise in firm foundings among producers. Since 2010, 34 producer firms were established - and these are firms that seek to develop new automation solutions.