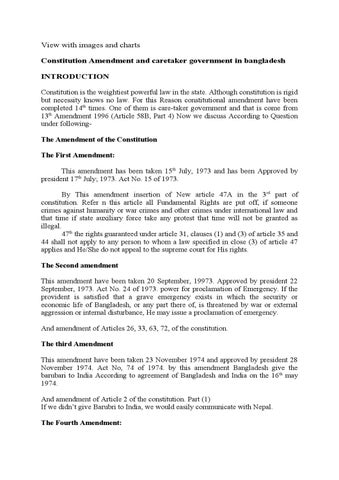 View with images and charts Constitution Amendment and caretaker government in bangladesh INTRODUCTION Constitution is the weightiest powerful law in the state. Although constitution is rigid but necessity knows no law. For this Reason constitutional amendment have been completed 14th times. One of them is care-taker government and that is come from 13th Amendment 1996 (Article 58B, Part 4) Now we discuss According to Question under followingThe Amendment of the Constitution The First Amendment: This amendment has been taken 15th July, 1973 and has been Approved by president 17th July; 1973. Act No. 15 of 1973. By This amendment insertion of New article 47A in the 3 rd part of constitution. Refer n this article all Fundamental Rights are put off, if someone crimes against humanity or war crimes and other crimes under international law and that time if state auxiliary force take any protest that time will not be granted as illegal. 47th the rights guaranteed under article 31, clauses (1) and (3) of article 35 and 44 shall not apply to any person to whom a law specified in close (3) of article 47 applies and He/She do not appeal to the supreme court for His rights. The Second amendment This amendment have been taken 20 September, 19973. Approved by president 22 September, 1973. Act No. 24 of 1973. power for proclamation of Emergency. If the provident is satisfied that a grave emergency exists in which the security or economic life of Bangladesh, or any part there of, is threatened by war or external aggression or internal disturbance, He may issue a proclamation of emergency. And amendment of Articles 26, 33, 63, 72, of the constitution. The third Amendment This amendment have been taken 23 November 1974 and approved by president 28 November 1974. Act No, 74 of 1974. by this amendment Bangladesh give the barubari to India According to agreement of Bangladesh and India on the 16 th may 1974. And amendment of Article 2 of the constitution. Part (1) If we didnâ&#x20AC;&#x2122;t give Barubri to India, we would easily communicate with Nepal. The Fourth Amendment:

We have regained our lost democracy by this amendment. The Thirteenth Amendment This amendment have been taken 27th march, 1996 and approved by the president 28 march 1996. Act No 1 of 1996. Non-party care-taken Government of peaceful national election. This amendment completed by article 58 (B) and part (iv). We will discuss about E.G after fourteenth amendment. Fourteenth Amendment This amendment have been taken 16 th may, 2004 and approved by president 17 th may. 2004. Act No of 2004. According to article 65 part (v), 45 women seats in the House of the Nation. According to article 96 part (vi) increases the age of justice of supreme court and increases the age of P.S.C. chairman and member according to article 139. part (9) CARETAKER GOVERNEMTN In 1993 first jamaat-E-Islami and Awami League and jatiya party submitted their respective bill concerning caretaker government. Every Bill contained the same object to make general elections free and fair and to make the whole process of election free from the government influence provision for caretaker government should be introduced in the constitution. But this demand of the opposition parties was treated by the government as unconstitutional and illegal. The Mgura byelection was the turning point for the movement of caretaker government. It was Magura by-election in which the government party Bangladesh Nationalist party took resort to an unprecedented malpractice and rigging. This election was manipulation of Bangladesh Nationalist party government as reported by most important dailies. Before Magura incident and boycott the parliament. Then they got their direct way of demanding that they would not go back to parliament till a â&#x20AC;&#x153;Caretaker governmentâ&#x20AC;? Bill was introduced in the House. The Bangladesh nationalist Party government the compelled to make election. On 24 th November 1995 the government dissolved the 5 th parliament and the 6th parliamentary election was scheduled on 15th February 1996. But since the government did not pay need to the demand of caretaker government by the opposition, all the opposition parties boycott election. The ruling party Bangladesh Nationalist Party processed to contest the election with sudden hand picked parties as the military director Ershad did. All the opposition parties launched their country wide non-cooperation movement. Lastly finding no other way out Bangladesh Nationalist party government introduced the caretaker government Bill (the 13th Amendment of the Constitution) on 21st March at the first session of the 6 th Parliament. The Bill was passed on the 26th march.

The term “Caretaker Government” means an interim government which is a non party government and abstains itself from contesting the election and is appointed particularly for conducting a free and fair election. When parliament stand stands dissolved on is dissolved because the government has been defeated in the floor and it has advised for it’s dissolution of parliament or because of any other reason, the existing government continuous in office till the new government is formed after election. The setting government after dissolution of parliament and before its reconstitution transforms automatically into a “ Caretaker Government” though a sitting one undertakes to take care of the affairs of the government for pre-election interim period during policies or commitments of a board and sweeping nature. In some cases to a particular special situation a caretaker government is formed on the basis of national consensus. Again in some written constitutions specific provisions are kept for caretaker government to conduct general election. For example, in Britain in 1995 after the second world war the cabinet formed by sir Ivon Jennings as caretaker government. Thirteenth amendment was made in march 28, 1996 which introduced the provisions of a non-party caretaker government to the constitution of Bangladesh (Chapter 11A, Article 58B-58E). The question of formation of caretaker government will arise in the following two situation: (i) If parliament is dissolved for any reason a caretaker government shall be appointed within 25 days after such dissolution. (ii) If parliament stands dissolved, a caretaker government shall be appointed within 15 days after such dissolution. According to Article 58(C) the caretaker government will work during the period from the date of which the chief adviser of the government enters upon office after parliament is dissolved by reason of expiration of its term till the date on which a new prime minister enters upon his office after the constitution of parliament. This government shall consist of the chief adviser at its head and not more than ten other advisers, all of whom shall be appointed by the president. The persons are appointed as an adviser on the chief adviser having some qualification. The chief adviser shall have the status, and shall be entitled to the remuneration and privilege of a prime minister and an adviser shall have the status, and shall be entitled to the remuneration and privileges of a minister. For the qualification of the advisors; under Article 58C(7) the president shall appoint advisers from among persons who are: (a) Qualified for election as members of parliament. (b) Not members of any political party or any organization associated with or affiliated to any political party. (c) Not, and have agreed n writhing not to be, candidates for ensuring election of members of parliament. (d) Not over seventy-two years of age.