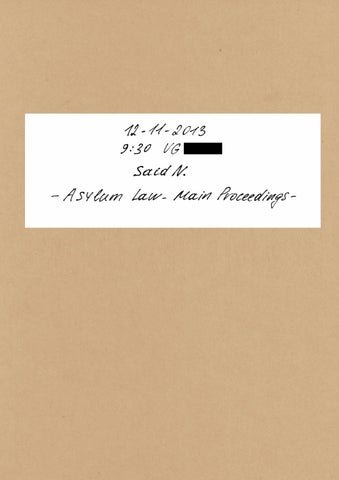 The defendant did not appear today.

I have on my sides professional and voluntary judges.

We have already thought about your case. First let me present your case. This is a long story, and parts of it arenâ&#x20AC;&#x2DC;t relevant anymore. Youâ&#x20AC;&#x2DC;re a Somalian citizen and entered Germany in July 2011. You graduated from school here and understand German well. The Federal Agency rejected your motion because they accuse you of filing a second application in Germany after your petition in Italy was rejected.

I have never denied that I travelled through Italy.

We must not forget we are talking about a minor here!

I came to Italy on a motorboat. I spent 7 months in an enclosed camp in Italy. Then I was released just like that. I signed a paper, but I donâ&#x20AC;&#x2DC;t know what it said.

Taking your fingerprints has been tried several times. The Federal Agency accuses you of wilfully manipulating the fingerprints. The prints could not be delivered to EURODAC for identification purposes. Your physician has confirmed that you have very faint friction ridges. Additionally, a deportation ban has been imposed due to your health. That means that you have nothing left to fear. You will not be send back to Somalia. But today you wanted to be granted the recognition of political persecution.

Do you have siblings in Somalia?

What did your family do for a living?

We lived from agriculture. My mother owned a shop. My father sold everything to get the money for my journey.

The shop was sold, too.

Why did you flee?

One day, al-Shabaab people came to my school. They said time for school was over. We were supposed to fight for the African Union. I was supposed to register, too, I was given one week to do so. The people who refused were shot on the beach. Everyone who could carry weapons had to go with the Somalian fighters.

Youâ&#x20AC;&#x2DC;ve said yourself that everyone able to carry weapons had to follow al-Shabaab. That would mean that everyone in Somalia is in danger, but you specifically are not being politically persecuted.

The judge explains that the asylum application wonâ&#x20AC;&#x2DC;t be approved as is. But due to a change in the laws, there appears to be an alternative. The judge discusses the paragraphs with the laywer. The lawyer would like to talk to the plaintiff outside the court room, so she can explain the situation to him. The session is interrupted.

The petition, as it was filed, is decided in your favour.

Said N. is a Somalian citizen, he entered Germany in July 2011.

Said N. is a Somalian citizen, he entered Germany in July 2011.