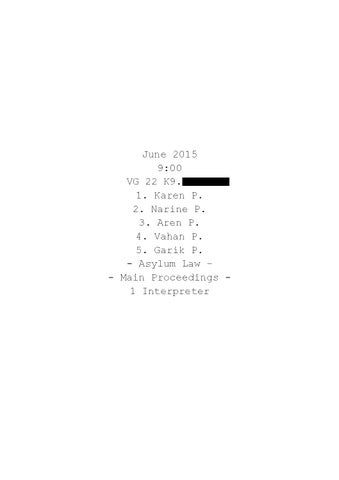 The claimants (five people: a mother, a father, two adolescents and a child), the judge and an Armenian interpreter are present in the courtroom at 9:00 am. Everybody is waiting for the claimantsâ&#x20AC;&#x2122; representative to arrive. At 9:20:

You can decide if you would like to begin without your lawyer. We have called her office. Unfortunately we cannot reach her.

Claimant: Yes, we would like to begin. Judge: My name is K., I am the judge assigned to your case today. I will briefly present the facts of your case. Then I will ask you some questions and subsequently make my decision.

The judge, looking at the claimantsâ&#x20AC;&#x2122; file: The claimants have brought a motion to be granted refugee status and subsidiary protection status. In addition, they are applying for a deportation prohibition pursuant to section 60, paragraph 5 or 7 of the Residency Act. Deportation prohibitions pursuant to section 60. The claimants are Armenian nationals. In 2010 they travelled to the Ukraine and from there to Belgium. In Belgium they applied for asylum. Their applications were rejected. The claimants left for Belarus and from there for Germany, where they once again applied for asylum. Claimant 1 founded his asylum application as follows: He was a member of the opposition party Orinats Yerkir and was threatened with political persecution in his home country. The other claimants are applying for asylum with their husband and father. In March 2013, the Federal Office dismissed their applications and threatened to deport them to Armenia. The Federal Office founded its decision as follows: The asylum application is unfounded, the political party Orinats Yerkir is now in power and even has a minister in parliament. The claimantsâ&#x20AC;&#x2122; application is superficial and non-credible. I have two new sets of facts in their file: a medical ertificate about the mother and wifeâ&#x20AC;&#x2122;s current condition. And claimant 4 has now turned 18 and is thus being threatened with conscription into the army in Armenia. These are the basic facts of the case. Do you have anything to add or correct?

There is a lot to add to almost everything. It has been said that my wifeâ&#x20AC;&#x2122;s application is non-credible. But she cannot know everything. We are an Armenian family, the wife is not told everything. One cannot expect a woman to deal with problems like these.

Claimant 1: There is a lot to add to almost everything. It has been said that my wifeâ&#x20AC;&#x2122;s application is non-credible. But she cannot know everything. We are an Armenian family, the wife is not told everything. One cannot expect a woman to deal with problems like these. Judge: That is understandable. That is not just unique to Armenia. Claimant 1: I am proud to be an Armenian. I would never have left my country if something like this hadnâ&#x20AC;&#x2122;t happened to me. And I would like to thank Germany for welcoming us the way that it has. We feel very content here. My sons are going to secondary school and we expect good marks from them this summer. My older son is an athlete; he is a Berlin champion, a German champion. Judge (smiling): In which sport? Claimant 1: In boxing. Judge: That is all well and good but it has nothing to do with your application for asylum. I will now hear your cases one by one. I will record the questions and your answers straight away. If you would like anything to be changed, please tell me at once. I will begin with Mrs P.

Do you still have family members in Armenia? Who? Where do they work?

Claimant: Only my husbandâ&#x20AC;&#x2122;s relations. Judge: You made an application for asylum in Belgium. What reasons did give for this application back then? Claimant: The same ones as in Germany. Judge: Can you be more specific? Claimant: We were persecuted in Armenia. We had life-threatening problems. Judge: Were you personally threatened in Armenia?

When my husband and my children are in danger, I also perceive it as a threat to me. My husband asked me to make sure the children were never left alone. I always had to take them to school, always had to pick them up, to accompany them to sport practice. I developed a feeling that we were in a dangerous situation.

Can you remember any specific incident?

The children were already in bed. My husband wasnâ&#x20AC;&#x2122;t at home. He always came home late from work. I heard a car stop outside our house. Four or five men, well dressed in suits, as if they were going to a wedding, got out and knocked on the door. They asked me about my husband. But they didnâ&#x20AC;&#x2122;t search the house. They stood in the apartment for a while. I was scared. The children asked who they were. I had to calm them down. When they visited again my husband took the children to stay with distant relatives in the countryside. I always wanted to know what was going on. He said that nothing had happened. But at the same time, he said that I had to take better care of the children.

A short knock. The door opens: Court usher: The lawyer just called. She asked if she should still come. Judge: Yes, absolutely. It is important for these proceedings.

Judge: Did your husband tell you when he joined the party? Claimant: No, I just knew that he was unhappy with the government. I am a quiet person; I was against getting involved in politics. But he wanted to be there for his people. Judge: What were his tasks in the party? Claimant: I don’t know. I didn’t know much. I just found out through the television that there was something going on, that there were protest demonstrations. Judge: Which body parts were injured when he was hit by the rubber bullets? Claimant: The front-right of his chest, on the left by his shoulders. Judge: You are currently receiving psychiatric treatment. Do you go there by yourself? Claimant: My husband or my neighbour accompanies me. They even go with me to the chemist if I need to buy medication. Judge: Would you like to tell the court anything else? Claimant: I don’t know what to say. I would do anything to not have to go back to that hell. And I want to become healthy again. Learn the language. My family needs me as a healthy mother. I just want peace for my children.

I can understand that you have integrated well here after so much time. But with regard to my decision in this case it is important that there is reason to expect further persecution. It is important that you tell us everything. Thatâ&#x20AC;&#x2122;s why I will ask you again: Have you disclosed all of the reasons for your application for asylum?

The judge hears the claimant (Mr P., the husband and father). At 10:53 the lawyer appears. She apologises for the delay.

The catalyst for the persecution was a demonstration on the 1st of March 2008 against vote rigging. The demonstration was violently shut down. Many died or were injured.

Judge: Your party is now in government. Claimant: Yes, but itâ&#x20AC;&#x2122;s not what you think. After the election, the opposition parties were invited to a round table. The chairman of our party was offered a seat in the new government. He accepted it. In doing so he betrayed his people. The party is divided. Many who were of a different opinion had problems. We didnâ&#x20AC;&#x2122;t just have the government but also our own party against us.

Did you go to the police about the attacks?

No, nobody goes to the police in a case like this. People in suits are part of the same structure. They are not going to shoot themselves in the foot.

Judge: How did you know that the attacks were politically motivated? Claimant: Thatâ&#x20AC;&#x2122;s how you silence those who are too loud. Judge: Did you submit asylum applications in Belgium for all of your children? For your youngest, too? Claimant: Possibly. I donâ&#x20AC;&#x2122;t know exactly. Our youngest was born in Belgium. The applications were dismissed when my wife was 7-months pregnant. We were thrown out of our apartment right away and stayed with acquaintances. We had to file four subsequent applications to make sure that my wife was taken care of. Judge: You submitted an application for asylum in Belgium. What were the reasons you supplied back then?

Claimant: We were being persecuted. My family was in danger. I am a member of the opposition party. If we go back, we will be persecuted again. Judge to the lawyer: Do you have any questions?

Yes. You said that you could identify one of the people who was persecuting you?

Claimant: Yes. His name isâ&#x20AC;Ś He is a very influential man. A general. He threatened to shoot me.

We know the story. We donâ&#x20AC;&#x2122;t have to look back into the protocols of the hearing. Have you named all the reasons for your application for asylum?

The judge hears the case of Claimant 3, the oldest son.

Lawyer: The claimant speaks German. Judge: Do you want to perform your military service?

Lawyer: That is a very provocative question!

My father spent his whole life in Armenia. Thatâ&#x20AC;&#x2122;s different. I am proud to be an Armenian, but I only spent my childhood there. I can still picture all the reasons that we left. I have a very defensive attitude with regard to that state, that government.

I have a very defensive attitude with regard to that state, that government.

At 12:36, all of the claimants are called into the courtroom.

Judge: I would like to make something clear. We are dealing with an application for asylum pursuant to section 71 of the Act for the Procedure for the Granting of Asylum. Germany is responsible for your asylum applications because you left Belgium for Belarus and spent longer than three months there. Belgium dismissed your applications for asylum. The law says that you can now only provide new reasons for your asylum application, reasons that have arisen since October 2011 or show us new proof. I asked you expressly about the reasons that you stated in Belgium. You said that they are the same reasons as in your German application. There are two new sets of facts: Claimant 2’s illness and the impending military service of your 18-year-old son. I will have to investigate these facts. The claimant’s medical certificates are current; treatment is based on weekly therapy. But depression can also be treated in Armenia… Lawyer: The family’s situation will be very precarious in Armenia. The claimant will fall into a new depression, fall ill again. It is still unclear whether the state will pay for her treatment. Judge: The claimant will not be alone in Armenia. Everybody starts speaking at the same time. There is a nervous tension in the room.

And if something happens to me? We will be persecuted as soon as we get back. We want to make that clear. But the authorities in Belgium didnâ&#x20AC;&#x2122;t investigate our case! Nobody has listened to us.

Thatâ&#x20AC;&#x2122;s why I interrogated you so extensively, so that you had the opportunity to tell us everything. It is not my personal decision that you are required to name new reasons but rather a requirement of the law. I will make my decision this afternoon. You will receive the decision in writing or from your lawyer.

The verbal proceedings are closed at 13:16.