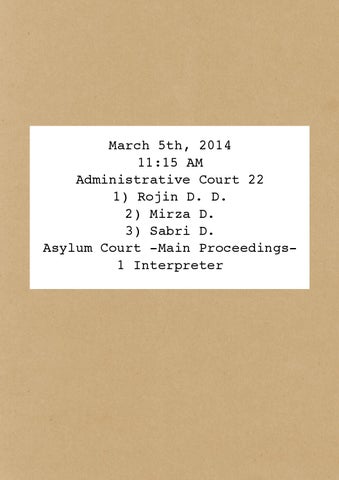 Hello Mrs. D., I am the only judge who will decide the status of you and your children. How is it working out with your interpreter?

There are two black folders here on the window sill. They contain the current views of the German Federal Ministry for Displaced Persons, Refugees and War Victims and those of the United Nations High Commissioner for Refugees in regards to the situation in Iraq.

Mrs. D., you are from Iraq, are of Kurdish descent and are a Yazidi. Your husband is a police officer. We just had a hearing on the status of the Yazidi minority in Iraq. Ms. B., your lawyer, spoke a great deal on this matter. I will add this information to the court record.

Ms. B, you need not present this again. May we also skip the commentary on this matter?

Judge: By whom? Plaintiff: I cannot say. Judge: Why?

What was in the letter, exactly?

Judge: Did you receive any other kinds of threats? Plaintiff: Yes. Phone calls. My husband got them on his cellphone. At the time he didnâ&#x20AC;&#x2122;t mention them. Only after we had left Iraq for Germany did he tell me about them. Judge: What happened next? Plaintiff: I got even more scared. I had saved some money in case, if something happened, that I could take the children and leave. 2,000 dollars as well as some other forms of cash.

Why did you go out onto the street on that night?

There was a knock on the door. I was afraid. I didnâ&#x20AC;&#x2122;t know who was there. I lost my nerve. My children and I left the house through the backdoor. My husband had made a plan for us.

Judge: What was his plan? Plaintiff: A friend of his helped us. He called a taxi which brought us to Rabia. Judge: Did the taxi driver charge you? Plaintiff: : No. Judge: What did you do after arriving in Rabia?

What was his last name? Ibrahimâ&#x20AC;Ś

We stayed with the taxi driver for two days. He took our passports in order to get everything ready. Then we went to Ibrahim Khalil and then to Silopi.

Were you charged later on?

Yes. The taxi driver gave me a phone number. That was for a man who also helped us; I paid him. I told him, “I’m a woman, please help me.”

(dictating): “I don’t know how much it cost because I paid with gold.” Dictated aloud, simultaneously translated und accepted.

You did not mention these threatening phone calls at the Federal Office. Mrs. D., can you explain this?

Only after arriving in Germany did Mrs. D....

Because I didnâ&#x20AC;&#x2122;t know anything about them. I only learned about them after my husband came to Germany and told me about them.

She did not know about the phone calls at the time. She fled with her children and her husband came afterwards. Mrs. D. learned the details only after he arrived in Germany.

I have no more questions.

(dictating): On one of these photos is a man in a police uniform. Heâ&#x20AC;&#x2122;s standing next to an American soldier.

You applied for refugee status and subsidiary protection. I will pass judgment this afternoon. Dictated aloud and accepted.

Judge (to interpreter): Are you familiar with this part of the world? Maybe you can help me. I donâ&#x20AC;&#x2122;t have a good map of the area; I was looking in an antique store. There were two maps from the 60â&#x20AC;&#x2122;s, one written in Cyrillic that I cannot read and one designed for the US Air Force. The latter does not name any locations, which probably is not important for the Air Force.

Are you drawing me?