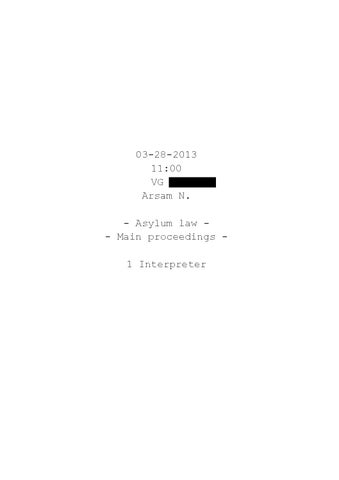 Arsam N., 20 years old, was born in Iran. There he was arrested after an incident. During his confinement he met a man who told him about Jesus Christ. Shortly after, Arsam was cleared of all charges and believed from that moment on that Jesus helped him to be freed. He started to visit a Protestant church in Iran. One day the church was attacked by the police. Arsam received threats from the police and even from his own family. He fled to Turkey and from there on to Germany. In Berlin he first attended an Iranian Christian congregation and switched then to the Protestant Congregation in R...trasse. The federal office rejected Arsamâ&#x20AC;&#x2DC;s application for asylum, claiming that his description of events was unrealistic and not true-to-life.

At the trial in the courtroom many members of his congregation are present to support him. Persian - German interpretation is provided.

At the federal office you claimed to be from a strictly religious family. But you didnâ&#x20AC;&#x2DC;t attend the Friday prayer on a regular basis and you consumed alcohol. Iâ&#x20AC;&#x2DC;ve got your baptism certificate here in front of me, and you told to the federal office earlier that you are attending an advanced course in Christian faith at the Protestant Congregation in R...strasse.

At first you fled to the North of Iran, then to Turkey and later to Germany. In your asylum application you wrote that you are a Christian.

Mrs. Gรถtz from your parish is 100% sure that your faith is sincere.

Can you remember the conversations you had at your home church in Iran?

At our home church, we used to sing and play the guitar. I hadnâ&#x20AC;&#x2DC;t seen something like that before. Then a verse from the Bible was read and discussed. Of course I listened, but canâ&#x20AC;&#x2DC;t remember anything special.

Please describe the reason for your asylum application in your own words.

Iâ&#x20AC;&#x2DC;d live my faith in Iran. But if I do that, my family, my father and the police will continue to threaten me. I was already threatened by police and my family before.

In Iran I lost everything. My job, my family. But I got something which is better, even better than my family (starts weeping). That was Jesus Christ. He gave me a feeling of security which even my family could not offer (sniffs).

Do you have a favourite verse from the Bible?

Treat others the same way you want them to treat you.

Islam is a religion calling for violence, war and bloodshed. I can quote you from the Qurâ&#x20AC;&#x2DC;an.

Not necessary, thank you.

What is your opinion about wars which are fought in the name of Jesus? Such like the Thirty Yearsâ&#x20AC;&#x2DC; War, or more recently, the clashes between Protestants and Catholics in Northern Ireland?

Why did you choose David as your baptismal name?

When asked, why he decided to take on the baptismal name of David, the plaintiff answered: Because he was king of Israel.

The Prostentant church is more free. And I can read the Bible by myself, without a mediator.

Why did you choose the Protestant denomiation over Catholicism?

My last question: How would you live your faith, should you return to Iran?

Arsam N., 20 years old, was born in Iran. He started to visit a protestant church in Iran. One day the church was attacked by the police. Ar...

Arsam N., 20 years old, was born in Iran. He started to visit a protestant church in Iran. One day the church was attacked by the police. Ar...