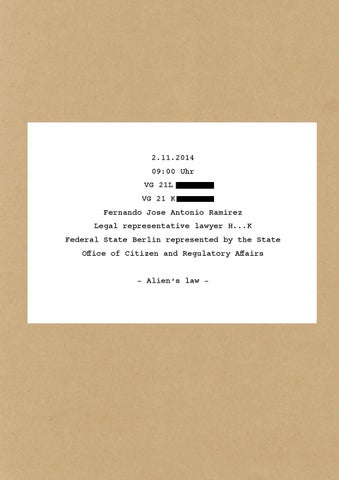 I will note down the attendees of today. Afterwards I am going to present the statement of affairs. In 2008 you came to Germany as the son of a diplomat. In 2009 you contracted a marriage. In June 2010 you and your former wife divorced which means that the required three years of marriage were not met. In 2010 your residence permit was extended. This year the extension was denied.

It does not suffice for a hardship case.

Yes, I was personally in Honduras. Although the criminality rate is very high this is not a hardship case.

Then letâ&#x20AC;&#x2DC;s concentrate on the labour permit. The Federal Employment Office denied an extension. However, as an alternative, you can enroll at a university. Could you explain which graduation degrees you accomplished?

Yes, of course. I grew up in the United States of America. There I attended High School. I will provide my certificates, but it will take a while. My sister will help me.

Defendant: Mr. R. is not a minor. His sister does not have to look after him. Lawyer: We need more time to provide the certificates. Judge: Did you accomplish any other degrees? Plaintiff: No. I worked in the advertising industry. Judge: Do you live alone or with your father? Plaintiff: With my father, his wife and one brother.

I attended High School from 2003 until 2007 in the USA. Afterwards I stayed in Honduras for a short period of time and from there I went to Germany. I worked as a fundraiser on behalf of an association.

There are no legal grounds for a work permit. If you want to stay in Germany you have to study. But in any case you will have to leave the country in order to apply for a study visa. There is no other way.

My company offered me further educational training in Hamburg.

Distance study is not recognized.

Can we make an application for extention?

I will give you a time limit of one month during which you would have to leave the country. Not more. Let me tell you this in advance.

Can I speak to my client for a moment?

The hearing is paused at 9.25. The lawyer and the plaintiff are leaving the court room.

A good boy. We usually deal with other kinds of people here. But he has no chance.

Defendant: Did he meet a buddy? Judge: Maybe he is occupied with doing his university degree at the moment (smiles). Defendant: Yes, he will bring a degree from Humboldt University (laughs).