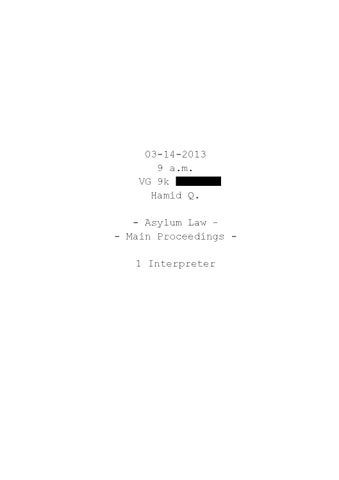 Hamid Q., born in Afghanistan, belongs to the Hazara ethnic group. As a minor, he was sentenced to 40 days prison due to his involvement in a car accident. Hamid Q. had stolen a car from his fatherâ&#x20AC;&#x2122;s workshop and was driving without a license. There was an accident, which left a young man severely injured. Both parties were found to be guilty. Hamid Q. was given a comparatively mild sentence. However, the family of the victim continued to threaten Hamid Q. with blood vengeance. Hamid Q. had to flee. His parents and siblings fled to Iran. The Federal Office did not believe in the truthfulness of Hamid Q.â&#x20AC;&#x2122;s narrative and refused to grant him asylum.

My memories haunt me I often see him lying there under my car, covered in blood. He was lying there like a corpse.

What happened to this man?

He survived, but he is paralyzed. It was an accident. I am extremely sorry about what happened. I destroyed everything. My family has been on the run for over two years now.

The plaintiff begins to weep

The family of the victim is after me. Iâ&#x20AC;&#x2122;m a Hazar, thatâ&#x20AC;&#x2122;s why. They claim I caused the accident intentionally. Even the prison wardens threatened me.

Is your family now staying in Iran illegally?

What did you do before?

I sold vegetables and helped my father in his workshop. My father has a forged passport.

Were you sentenced immediately after the trial?

Yes, they sentenced me to 40 days in prison.

I believe your account. And I know that blood vengeance has to be taken seriously. I need to make a phone call to the Federal Office.

Do you understand some German? What are you doing in Berlin, are you attending school?

I am studying to pass ninth grade.

What would happen to you if you returned home?