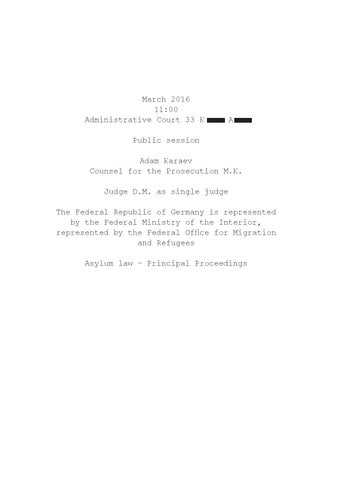 In the Courtroom Judge: Youâ&#x20AC;&#x2122;ve speaking to the interpreter in Chechen, correct? Can you understand one another well? Judge(dictating): Present in the courtroom: The plaintiff, the attorney Ms. K. and the interpreter from the Chechen language. The defence is not present. Judge: Firstly, the case as it is presented in the records. Mr. Karaev, you were born in 1971. In the summer of 2012 you left your country. You applied for asylum in Germany. The Federal Office for Migration and Refugees rejected your application, because they considered your life story implausible. This claim is directed against that decision. That is why we are here today. That is the basic framework. Is this true so far? Mr. Karaev, please tell me why you left your homeland. The plaintiff becomes nervous, looks behind him, and speaks to the interpreter. You canâ&#x20AC;&#x2122;t hear what they are talking about. Interpreter: I just explained why other people are allowed to be here. Because the hearing is public.

The judge nods her head. Judge: I want to point out that you are obliged to tell the truth. So, why did you leave your homeland? Plaintiff: I already explained everything before. Judge: I don’t want to hear the story from before, I want to hear the story from today. Please tell me how it really was. Plaintiff: In the first Chechen War I provided the fighters with food and medication. My brother and I joined the resistance army. When the Russian army invaded, the fighters went to the forests. I continued to help them. From 2005 to 2011 I had no more contact with them, I didn’t want to have contact with them anymore. Judge(dictating): To the question, what happened after that, the plaintiff answered: “In Grozny I met Umar by chance. He recognised me. He told me, if I didn’t continue helping he would tell the police that I had previously helped the fighters. He blackmailed me.” Judge: Continue. Plaintiff: Umar gave me money. I was supposed to get medication and food. Once a young man from my village was arrested. He had apparently helped the fighters. I knew that he hadn’t. But he knew that I had. His family came to me and said that I should give myself up voluntarily. I should tell them that I had done it, not the boy. Judge(dictating): “I didn’t want to give myself up. I knew that I would be locked up and tortured.”

Plaintiff: I didn’t give myself up. But a friend of mine, who had a connection to the police, told me that I had been given away by the boy anyway. I disappeared to Ingushetia immediately. Judge: When and how often did you help Umar? I need chronological information. Plaintiff: Last year maybe six or seven times. Judge: You say that the circumstances in the country changed and you didn’t want to help the fighters anymore. What exactly did you mean by that? Plaintiff: In the first Chechen war the whole population fought. It was a war of resistance. But in 2011 the Chechen government was in power. There were terror attacks. That wasn’t the case in the first war. I didn’t want to have anything to do with that. I had a sick mother, I wanted to take care of her. Judge: I gather from the records that your mother lives in Germany. Your wife and child too. Your mother even came to Germany before you. What I don’t understand is, why didn’t you all travel together? Judge(dictating): To the question, why the plaintiff didn’t travel together with his mother, the plaintiff answered: “I was afraid that our cover would be blown.” Judge: Why did you say in the hearing that you were unmarried and had no children?

Plaintiff: We separated. Judge: But surely your son remains your son? Plaintiff: My wife only gave birth after our separation. She never told me anything about the child. Judge: What strange things did your son experience? Why is he being treated for trauma? Plaintiff: I couldnâ&#x20AC;&#x2122;t say. Judge: Ms. K., do you have further questions? Attorney: What happened to your brother? Plaintiff: He died in prison. After the war we lost contact for a long time. He had to flee and go underground. He was later arrested in Russia. They brought him to prison. He was brutally hit and tortured there a few months ago. He didnâ&#x20AC;&#x2122;t survive. Judge: How is your mother? Who cares for her? You? Plaintiff: My mother is very sick. She is almost entirely bedbound. Judge(dictating): My mother has problems with her liver and heart. She is in a wheelchair. She has to take medication often. I have to help her, because she can only see very badly.

Judge: Mr. Karaev, is there anything else you want to tell me finally to help me to make the decision? The Plaintiff remains silent. Judge: The decision will be communicated to you in writing. Judge(dictating): The Counsel for the Prosecution applied to oblige the defence to award the plaintiff asylum status; alternatively, to award the plaintiff subsidiary protection; alternatively, to declare that a deportation ban, in line with paragraph 5 and paragraph 7, sentence 1, of the Residence Act, is available. Dictated aloud and approved. The hearing is ended at 12.55.