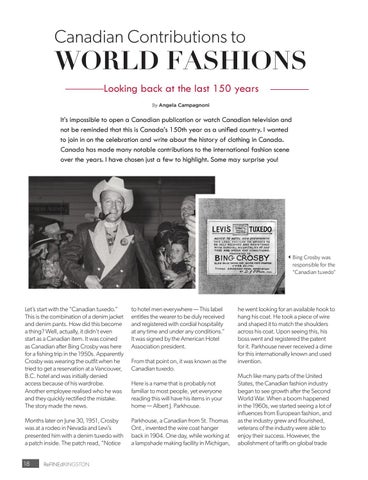 It’s impossible to open a Canadian publication or watch Canadian television and not be reminded that this is Canada’s 150th year as a unified country. I wanted to join in on the celebration and write about the history of clothing in Canada. Canada has made many notable contributions to the international fashion scene over the years. I have chosen just a few to highlight. Some may surprise you!

Bing Crosby was responsible for the “Canadian tuxedo”

Let’s start with the “Canadian tuxedo.” This is the combination of a denim jacket and denim pants. How did this become a thing? Well, actually, it didn’t even start as a Canadian item. It was coined as Canadian after Bing Crosby was here for a fishing trip in the 1950s. Apparently Crosby was wearing the outfit when he tried to get a reservation at a Vancouver, B.C. hotel and was initially denied access because of his wardrobe. Another employee realised who he was and they quickly rectified the mistake. The story made the news.

to hotel men everywhere — This label entitles the wearer to be duly received and registered with cordial hospitality at any time and under any conditions.” It was signed by the American Hotel Association president.

Months later on June 30, 1951, Crosby was at a rodeo in Nevada and Levi’s presented him with a denim tuxedo with a patch inside. The patch read, “Notice

Parkhouse, a Canadian from St. Thomas Ont., invented the wire coat hanger back in 1904. One day, while working at a lampshade making facility in Michigan,

From that point on, it was known as the Canadian tuxedo. Here is a name that is probably not familiar to most people, yet everyone reading this will have his items in your home — Albert J. Parkhouse.

he went looking for an available hook to hang his coat. He took a piece of wire and shaped it to match the shoulders across his coat. Upon seeing this, his boss went and registered the patent for it. Parkhouse never received a dime for this internationally known and used invention. Much like many parts of the United States, the Canadian fashion industry began to see growth after the Second World War. When a boom happened in the 1960s, we started seeing a lot of influences from European fashion, and as the industry grew and flourished, veterans of the industry were able to enjoy their success. However, the abolishment of tariffs on global trade