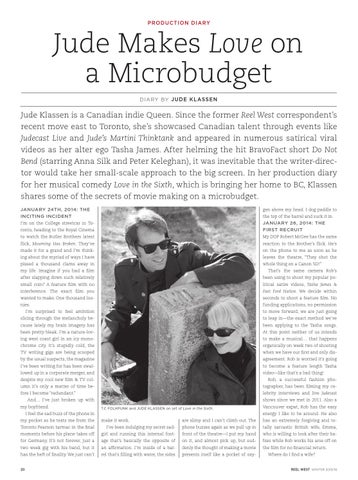 Jude Klassen is a Canadian indie Queen. Since the former Reel West correspondent’s recent move east to Toronto, she’s showcased Canadian talent through events like Judecast Live and Jude’s Martini Thinktank and appeared in numerous satirical viral videos as her alter ego Tasha James. After helming the hit BravoFact short Do Not Bend (starring Anna Silk and Peter Keleghan), it was inevitable that the writer-director would take her small-scale approach to the big screen. In her production diary for her musical comedy Love in the Sixth, which is bringing her home to BC, Klassen shares some of the secrets of movie making on a microbudget. JANUARY 24TH, 2014: THE INCITING INCIDENT

gen above my head. I dog paddle to

I’m on the College streetcar in Toronto, heading to the Royal Cinema

to watch the Butler Brothers latest

My DOP Robert McGee has the same

reaction to the Brother’s flick. He’s

made it for a grand and I’m think-

on the phone to me as soon as he

ing about the myriad of ways I have

leaves the theatre, “They shot the

pissed a thousand clams away in

whole thing on a Canon 5D!”

the top of the barrel and suck it in.

my life. Imagine if you had a film

after slapping down such relatively

been using to shoot my popular po-

small coin? A feature film with no

interference. The exact film you

Fast Ford Nation. We decide within

wanted to make. One thousand loo-

seconds to shoot a feature film. No

to move forward, we are just going

slicing through the melancholy be-

cause lately my brain imagery has

been applying to the Tasha songs.

been pretty bleak. I’m a nature-lov-

At this point neither of us intends

to make a musical… that happens

organically on week two of shooting

TV writing gigs are being scooped

when we have our first and only dis-

by the usual suspects, the magazine

I’ve been writing for has been swal-

to become a feature length Tasha

lowed up in a corporate merger, and

umn it’s only a matter of time be-

tographer, has been filming my ce-

lebrity interviews and live Judecast shows since we met in 2011. Also a

And… I’ve just broken up with my boyfriend.

T.C FOLKPUNK and JUDE KLASSEN on set of Love in the Sixth.

my pocket as he texts me from the

Vancouver expat, Rob has the easy energy I like to be around. He also

I feel the sad buzz of the phone in make it work.

are slimy and I can’t climb out. The

has an extremely forgiving and to-

Toronto Pearson tarmac in the final

I’ve been indulging my secret sad-

phone buzzes again as we pull up in

moments before his plane takes off

girl and running this internal foot-

front of the theatre—I put my hand

who is willing to look after their ba-

for Germany. It’s not forever, just a

age that’s basically the opposite of

on it, and almost pick up, but sud-

bies while Rob works his arse off on

two week gig with his band, but it

an affirmation. I’m inside of a bar-

denly the thought of making a movie

the film for no financial return.

has the heft of finality. We just can’t

Where do I find a wife?

A Magazine for the Film, Television and Digital Production Industry.