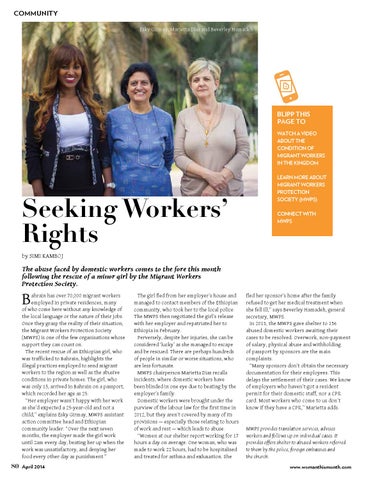 The abuse faced by domestic workers comes to the fore this month following the rescue of a minor girl by the Migrant Workers Protection Society.

ahrain has over 70,000 migrant workers employed in private residences, many of who come here without any knowledge of the local language or the nature of their jobs. Once they grasp the reality of their situation, the Migrant Workers Protection Society (MWPS) is one of the few organisations whose support they can count on. The recent rescue of an Ethiopian girl, who was trafficked to Bahrain, highlights the illegal practices employed to send migrant workers to the region as well as the abusive conditions in private homes. The girl, who was only 15, arrived in Bahrain on a passport, which recorded her age as 25. “Her employer wasn’t happy with her work as she’d expected a 25-year-old and not a child,” explains Esky Girmay, MWPS assistant action committee head and Ethiopian community leader. “Over the next seven months, the employer made the girl work until 2am every day, beating her up when the work was unsatisfactory, and denying her food every other day as punishment.”

The girl fled from her employer’s house and managed to contact members of the Ethiopian community, who took her to the local police. The MWPS then negotiated the girl’s release with her employer and repatriated her to Ethiopia in February. Perversely, despite her injuries, she can be considered ‘lucky’ as she managed to escape and be rescued. There are perhaps hundreds of people in similar or worse situations, who are less fortunate. MWPS chairperson Marietta Dias recalls incidents, where domestic workers have been blinded in one eye due to beating by the employer’s family. Domestic workers were brought under the purview of the labour law for the first time in 2012, but they aren’t covered by many of its provisions — especially those relating to hours of work and rest — which leads to abuse. “Women at our shelter report working for 17 hours a day on average. One woman, who was made to work 22 hours, had to be hospitalised and treated for asthma and exhaustion. She

fled her sponsor’s home after the family refused to get her medical treatment when she fell ill,” says Beverley Hamadeh, general secretary, MWPS. In 2013, the MWPS gave shelter to 156 abused domestic workers awaiting their cases to be resolved. Overwork, non-payment of salary, physical abuse and withholding of passport by sponsors are the main complaints. “Many sponsors don’t obtain the necessary documentation for their employees. This delays the settlement of their cases. We know of employers who haven’t got a resident permit for their domestic staff; nor a CPR card. Most workers who come to us don’t know if they have a CPR,” Marietta adds. MWPS provides translation services, advises workers and follows up on individual cases. It provides offers shelter to abused workers referred to them by the police, foreign embassies and the church. www.womanthismonth.com