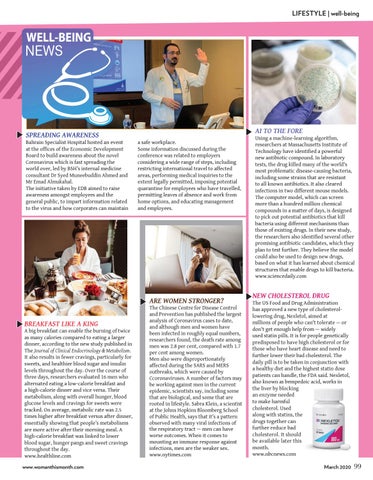 Bahrain Specialist Hospital hosted an event at the offices of the Economic Development Board to build awareness about the novel Coronavirus which is fast spreading the world over, led by BSH’s internal medicine consultant Dr Syed Muneebuddin Ahmed and Mr Emad Almukahal. The initiative taken by EDB aimed to raise awareness amongst employees and the general public, to impart information related to the virus and how corporates can maintain

AI TO THE FORE a safe workplace. Some information discussed during the conference was related to employers considering a wide range of steps, including restricting international travel to affected areas, performing medical inquiries to the extent legally permitted, imposing potential quarantine for employees who have travelled, permitting leaves of absence and work from home options, and educating management and employees.

A big breakfast can enable the burning of twice as many calories compared to eating a larger dinner, according to the new study published in The Journal of Clinical Endocrinology & Metabolism. It also results in fewer cravings, particularly for sweets, and healthier blood sugar and insulin levels throughout the day. Over the course of three days, researchers evaluated 16 men who alternated eating a low-calorie breakfast and a high-calorie dinner and vice versa. Their metabolism, along with overall hunger, blood glucose levels and cravings for sweets were tracked. On average, metabolic rate was 2.5 times higher after breakfast versus after dinner, essentially showing that people’s metabolisms are more active after their morning meal. A high-calorie breakfast was linked to lower blood sugar, hunger pangs and sweet cravings throughout the day. www.healthline.com www.womanthismonth.com

The Chinese Centre for Disease Control and Prevention has published the largest analysis of Coronavirus cases to date, and although men and women have been infected in roughly equal numbers, researchers found, the death rate among men was 2.8 per cent, compared with 1.7 per cent among women. Men also were disproportionately affected during the SARS and MERS outbreaks, which were caused by Ccoronaviruses. A number of factors may be working against men in the current epidemic, scientists say, including some that are biological, and some that are rooted in lifestyle. Sabra Klein, a scientist at the Johns Hopkins Bloomberg School of Public Health, says that it’s a pattern observed with many viral infections of the respiratory tract — men can have worse outcomes. When it comes to mounting an immune response against infections, men are the weaker sex. www.nytimes.com

Using a machine-learning algorithm, researchers at Massachusetts Institute of Technology have identified a powerful new antibiotic compound. In laboratory tests, the drug killed many of the world's most problematic disease-causing bacteria, including some strains that are resistant to all known antibiotics. It also cleared infections in two different mouse models. The computer model, which can screen more than a hundred million chemical compounds in a matter of days, is designed to pick out potential antibiotics that kill bacteria using different mechanisms than those of existing drugs. In their new study, the researchers also identified several other promising antibiotic candidates, which they plan to test further. They believe the model could also be used to design new drugs, based on what it has learned about chemical structures that enable drugs to kill bacteria. www.sciencedaily.com

The US Food and Drug Administration has approved a new type of cholesterollowering drug, Nexletol, aimed at millions of people who can't tolerate — or don't get enough help from — widely used statin pills. It is for people genetically predisposed to have high cholesterol or for those who have heart disease and need to further lower their bad cholesterol. The daily pill is to be taken in conjunction with a healthy diet and the highest statin dose patients can handle, the FDA said. Nexletol, also known as bempedoic acid, works in the liver by blocking an enzyme needed to make harmful cholesterol. Used along with statins, the drugs together can further reduce bad cholesterol. It should be available later this month. www.nbcnews.com March 2020