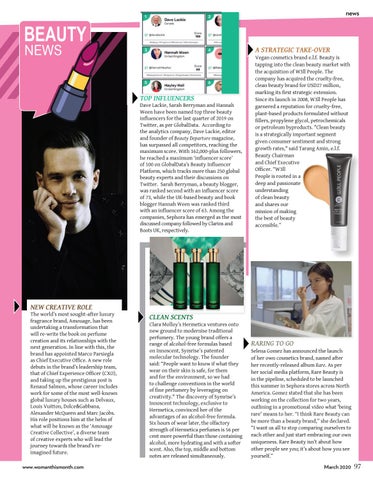 Dave Lackie, Sarah Berryman and Hannah Ween have been named top three beauty influencers for the last quarter of 2019 on Twitter, as per GlobalData. According to the analytics company, Dave Lackie, editor and founder of Beauty Departure magazine, has surpassed all competitors, reaching the maximum score. With 162,000-plus followers, he reached a maximum ‘influencer score’ of 100 on GlobalData’s Beauty Influencer Platform, which tracks more than 250 global beauty experts and their discussions on Twitter. Sarah Berryman, a beauty blogger, was ranked second with an influencer score of 73, while the UK-based beauty and book blogger Hannah Ween was ranked third with an influencer score of 63. Among the companies, Sephora has emerged as the most discussed company followed by Clarins and Boots UK, respectively.

The world’s most sought-after luxury fragrance brand, Amouage, has been undertaking a transformation that will re-write the book on perfume creation and its relationships with the next generation. In line with this, the brand has appointed Marco Parsiegla as Chief Executive Office. A new role debuts in the brand’s leadership team, that of Chief Experience Officer (CXO), and taking up the prestigious post is Renaud Salmon, whose career includes work for some of the most well-known global luxury houses such as Delvaux, Louis Vuitton, Dolce&Gabbana, Alexander McQueen and Marc Jacobs. His role positions him at the helm of what will be known as the ‘Amouage Creative Collective’, a diverse team of creative experts who will lead the journey towards the brand’s reimagined future. www.womanthismonth.com

Vegan cosmetics brand e.l.f. Beauty is tapping into the clean beauty market with the acquisition of W3ll People. The company has acquired the cruelty-free, clean beauty brand for USD27 million, marking its first strategic extension. Since its launch in 2008, W3ll People has garnered a reputation for cruelty-free, plant-based products formulated without fillers, propylene glycol, petrochemicals or petroleum byproducts. "Clean beauty is a strategically important segment given consumer sentiment and strong growth rates," said Tarang Amin, e.l.f. Beauty Chairman and Chief Executive Officer. “W3ll People is rooted in a deep and passionate understanding of clean beauty and shares our mission of making the best of beauty accessible.”

Clara Molloy’s Hermetica ventures onto new ground to modernise traditional perfumery. The young brand offers a range of alcohol-free formulas based on Innoscent, Symrise’s patented molecular technology. The founder said: “People want to know if what they wear on their skin is safe, for them and for the environment, so we had to challenge conventions in the world of fine perfumery by leveraging on creativity." The discovery of Symrise’s Innoscent technology, exclusive to Hermetica, convinced her of the advantages of an alcohol-free formula. Six hours of wear later, the olfactory strength of Hermetica perfumes is 56 per cent more powerful than those containing alcohol, more hydrating and with a softer scent. Also, the top, middle and bottom notes are released simultaneously.

Selena Gomez has announced the launch of her own cosmetics brand, named after her recently-released album Rare. As per her social media platform, Rare Beauty is in the pipeline, scheduled to be launched this summer in Sephora stores across North America. Gomez stated that she has been working on the collection for two years, outlining in a promotional video what 'being rare' means to her. “I think Rare Beauty can be more than a beauty brand,” she declared. “I want us all to stop comparing ourselves to each other and just start embracing our own uniqueness. Rare Beauty isn’t about how other people see you; it’s about how you see yourself.” March 2020